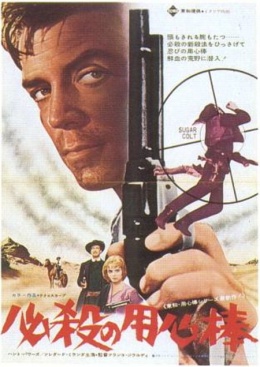 If ever there was a film that couldn't make up its mind what it wanted to be that film has to be Sugar Colt.

From its dramatic and violent opening with haunting almost funereal music you would assume that you were in for a couple of hours of hard nosed gun play and vengeance. But no sooner have the opening credits disappeared than we are apparently in a different movie. The character of Sugar Colt is introduced as a kind of Simon Templar figure, playing up to the girls and establishing himself as a skilful but strictly light hearted detective. Once this is established, Colt's old boss is gunned down in the street, swinging the mood back to the dark side only for it to swing back just as quick when Colt sets off for the town of Snake Valley to solve the mystery of the missing cavalry officers which led to his boss' death.

The movie is only 15 minutes old and I'm already confused!

What compounds this continual lurching from one mood to another is the totally disjointed music score provided by Luis Enrique Bacalov. Bacalov is one of the musical masters of the genre and his work on this film is up to his usual high standard; providing two catchy and evocative themes that recur throughout the film. The problem is that one is the aforementioned funereal solo trumpet number while the other is a pre Trinity, yet Trinityesque piccolo trill which clearly denotes a tongue firmly held in cheek. What results is a Jekyll and Hyde product that is impossible to nail down in one direction or another.

Now, as my previous readers will know, I have no problem with a spaghetti western that rides the middle ground between drama and comedy. When done properly this approach suits the campness of sixties italian genre films perfectly. One word will suffice to describe how this can all work to everyone's satisfaction. Sabata. However, what Sabata and films of its ilk do well is maintain a constant mood of kitsch action. The characters are all a bit larger than life and the drama never goes much beyond the melo variety. Any Gun Can Play, Enzo Castellari's caper film of 1968, follows a similar pattern and works almost as well. But for some reason Giraldi never allows Sugar Colt to settle in this territory and the film loses out as a result.

This is a real pity as the film has many ingredients which could pay off handsomely. Hunt Powers, who plays Colt, carries the part well. If truth be told, the film's oscilating style shows that he could have played the role equally effectively straight or for laughs. Looking somewhat like a shorter, big eared George Clooney he is genuinely convincing both as the awkward doctor, who's persona he adopts to work under cover in Snake Valley, or the dynamic Sugar Colt. Although he would go on to find noteriety in the films of the genre's favourite hack, Demofilo Fidani, Powers shows in this film that he had real potential.

But the film benefits from even more positive assets than this. It also boasts the lovely Soledad Miranda as the beauty he wins over during his stay in Snake Valley, as well as the capable cinematography of Alejandro Ulloa. Both are personel worthy of note. And once you add all that to the marvelous Bacalov it is clear that you have a recipe which should delight any palate.

So why doesn't it work?

I'm afraid the blame must lie with Giraldi. His record in the genre shows more than one film that suffers from this unhappy mix of comedy and drama. His McGregor films (Seven Guns For the McGregors and Up the McGregors!) are similar examples and are also films which are ultimately not bad, in fact they are very good in parts. They are just not as good as they could be. And that, unfortunately, sums up Sugar Colt. Not a bad film by any means. With a good if disjointed score and a capable cast it is most definately worth a viewing. Indeed it is quite pleasurable in parts. It's just not as good as it could be. And that is a real shame.