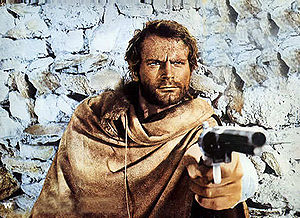 Childhood - from Italy to Germany and back

Terence Hill was born, from an Italian father and a German mother, as Mario Girotti in Venice, March 29, 1939. He spent most of his early youth in Germany, in a small village called Lommatzsch in Saxony. After the war (Saxony became a part of East-Germany) the family moved to Italy. He did very well in school and developed a hobby he would have in common with his later partner Carlo Pedersoli (Bud Spencer): swimming. He won several medals in regional tournament as a kid, but unlike Spencer he was never selected for any Olympic or national team.

First acting experiences - and again from Italy to Germany and back 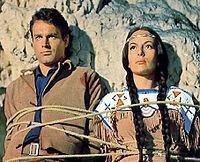 Hill started acting at the age of twelve, when the director Dino Risi gave him a small part (because of his good looks) in the movie Vacanze col Gangster (1951). He occasionally accepted other small roles, but spent more time on studying Literature at the University of Rome. In 1963 he was offered a small part in Luchino Visconti’s I Gattopardi, a prestigious adaptation of Lampedusa’s classic Italian novel. In the mean time he had given up his studies and played in several German movies, among them a few German Karl May adaptations. Later he thought this had been a mistake: he had gone to Germany to star in Sauerkraut westerns while the real thing was going on in his home country. But his chance of a lifetime came when actor Peter Martell was hurt during the preparations of Giuseppe Colizzi’s God Forgives, I don’t. It’s often said Martell broke of toe or a foot when he kicked a chair during an argument with his wife, but it was revealed later that he broke a leg when he fell from the stairs after his wife had slapped him because he had slept with a Spanish señorita from the crew. The works could not be postponed and Colizzi needed an another actor, quick. His colleague, producer Mario Bolognino told him to take Hill, a good-looking young actor who had been in his production Little Rita nel west, and could ride a horse. The film was a great success and one of the most successful partnerships in the history of European film history, the couple Hill-Spencer, was born. It was a very fortunate production for Hill, since he also met his future wife on the set, American actress (of German descent) Lori Zwicklbauer. Both Italian actors also chose their international names on the set of God forgives… I don’t!: Hill took his from a list of names proposed to him, Spencer named himself after his favourite beer (Budweiser) and actor (Spencer Tracey). Actually the film wasn’t the first in which both actors appeared: they had been in Hannibal (Annibale, 1995), but without sharing a scene. In the years to come, the couple made two other westerns with Colizzi, Ace High (also starring Eli Wallach) and Boot Hill (also starring Woody Strode). In the meantime Hill had appeared in Get a coffin ready/Viva Django!, a sort of prequel to Corbucci’s famous movie, in which he replaced first choice Franco Nero, who had chosen for a Hollywood adventure (Camelot). All these productions were reasonably successful, but he (and Spencer) would only rise to world fame with the Trinity movies.

The Trinity – and other - movies 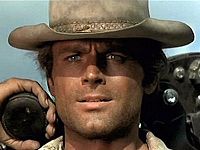 The genesis of the first Trinity movie, They call me Trinity, is still a little obscure. The director, Enzo Barboni, has always sustained that he wanted to make a comedy western ever since he had been Sergio Corbucci’s cinematographer for Django, but recent investigations seem to point out that he had a far more serious film in mind. Only relatively late it was decided to make a comedy. The success was enormous and breathed new life in the industry of the Italian genre movie. The quickly produced sequel, Trinity is still my Name (1971), was even more successful and even beat Leone’s classics at the box-office, becoming the most successful Italian western in history. Hill was now the most popular actor within the Italian genre movie industry. While he had been used as a kind of ersatz Franco Nero a few years earlier, Franco Nero was now cast as an ersatz Terence Hill in several comedy westerns! His fame resulted in two starring roles in films conceived (and - partially or largely – directed) by Sergio Leone : the classic My Name is Nobody and the less successful sequel A Genius, two Partners and a Dupe.

After the two Trinity movies, the adventures of the brothers were transported to other locations, All the way boys (1972) was set in South-America, I’m with the Hippopotamus (1979) in Africa and Miami Supercops (1985) in … guess what. Although the films had bigger budgets and usually excellent directors (Colizzi, Barboni, even Corbucci), none of them was as funny (nor as successful) as the Trinities. In 1971 Hill and his family had moved the US, and in the course of the years he made a few films in Hollywood, such as the Foreign Legion drama March or Die (1977), in which he was cast alongside Gene Hackman. In 1994 a kind of Trinity III was made, Troublemakers, a come back western starring both Hill and Spencer. The Italian title, Botte di Natale, means The Christmas Beatings, and the movie’s setting on Christmas Eve, was a nod to the popularity of the Trinity movies in the days around Christmas in Italy.

In 1990 his adopted son Ross was killed in a car accident while Hill was preparing his Lucky Luke adaptations. Ross had already made some brief appearances in Don Camillo (1983) and Renegade (1987), and was also supposed to star in Lucky Luke, but unfortunately Hill had to make the film and the series without him. After the turn of the millennium, and after a period of depression because of his son’s death, he once again became one of Italy’s most beloved actors, as a crime-fighting priest in the long-running TV-series Don Matteo. The series was shot in Gubbio, a wonderful medieval town in Umbria, central Italy, and therefore Hill spent his time between the US and Italy. In 2006 Hill and Spencer were officially honoured, by the public and (for the first time) the critics, in the TV-show “Primo piano all’attore” for their entire body of work.