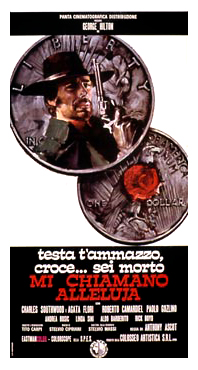 An exciting story based on the revolution of the Mexicans against the domination of their country by the European emperor Maximilian. General Ramirez, fighting for the Mexican leader Juarez, orders Hallelujah to seize the purse of jewels with which Maximilian plans to purchase weapons. Hallelujah finds this no easy assignment as he has to fight off bandits, outwit secret agents, a fake sister, a so-called Russian prince and other scoundrels.

"Towards the end of the SW cycle, a lot of films got goofy, especially after the international success of They Call Me Trinity. Obviously the audiences didn't want to take these movies serious anymore. This is one of the goofiest, and it still succeeds in being "laugh-out-loud" funny. Elements from the Revolutionary westerns, the Super Hero Gunslinger films, and even the James Bond films get mixed together to create a stew filled with mischievous mayhem and massacre" (William Connolly)

Silly is another good word to describe Carnimeo's best directed western, but here the overall silliness works, though always on the edge of crashing down, for the film. If you can enjoy the scene in which Charles Southwood, after being tortured, awakens and breaks into a (fake?) Russian dance, which suddenly turns into a way to knock out his tormentors, than you will most likely enjoy the whole film. Not forgetting to mention another plus factor, the beautiful, often percussive soundtrack by Stelvio Cipriani.