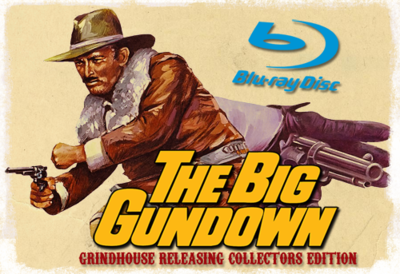 Following the decline of the popular peplum (sword and sandals movies), the international success of Sergio Leone's Dollars Trilogy kicked off another new rage in popular Italian genre cinema: the Western. One of the many journeymen directors to follow Leone's lead was Sergio Sollima (Face to Face, Run Man Run) who had previously worked in the James Bond spy ripoff genre. His 1966 masterpiece The Big Gundown was his explosive entry into the territory of wild west storytelling. Much like Sergio Corbucci's concept in Django, Sollima was interested in placing political and social themed ideas within the Western stories he told. A lifelong fan of these films since his childhood, Sollima deeply respected the Western and instead of treating his work as just mindless pulpy action adventures there was something more he wanted to bring to them which makes his productions particularly important.

Actor Lee Van Cleef was a veteran of American Westerns and TV shows but usually cast in supporting roles. Yet in Italy, his work under Sergio Leone made him a massive icon and celebrated star. In The Big Gundown he plays Jonathan Corbett, a wily, lightning fast on the draw bounty hunter. When we first meet him he is waiting for three outlaws who don't realize they've ridden right into his trap. As one of their pals swings dead from a noose nearby, Corbett announces he isn't the man they expect but the very bounty hunter who is supposed to be behind them on the trail. After dispatching all three in a Mexican standoff, Corbett is invited to a gathering at the home of Mr. Brokston (Walter Barnes) a wealthy, elite industrialist. While enjoying the festivities, Corbett is approached by Brokston who suggests that he run for the Senate and join him in his endeavors taking over The West and constructing a new railroad system. Corbett has no reason to relent at this idea and swiftly accepts Brokstons generous offer. Soon after, two men arrive at Brokston's home with shocking news that a 12 year old girl has been raped and killed by a dangerous bandito named Cuchillo "The Knife" Sanchez (Tomas Milian). Brokston hears this and knows just what to do. He gives Corbett an official tin badge and hires him to get Cuchillo since he's an expert on such matters. With no questions asked, Corbett quickly jumps into action and sets off to find the scoundrel.

The Big Gundown is easily one of the best Italian Westerns ever made due to its tightly directed/staged scenes, a genius score by Il Maestro Ennio Morricone featuring the booming title song sung by Christy (Danger: Diabolik, OK Connery) and an idea that goes above and beyond the usual genre tales. Thanks to Grindhouse Releasing, film enthusiasts and Spaghetti Western fans alike can now appreciate the movie in all its magnificence.

Retrieved from "https://www.spaghetti-western.net/index.php?title=The_Big_Gundown_-_4_Disc_Collector%27s_Edition_Blu_Ray/DVD_Review&oldid=85671"
Categories:
Cookies help us deliver our services. By using our services, you agree to our use of cookies.