Difference between revisions of "The Complete Sartana Bluray Collection review"

this article is under construction 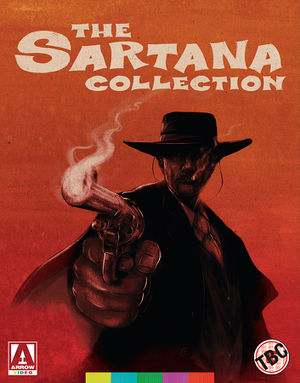 This is a review of Arrow Video's Complete Sartana box consisting of five BluRay discs containing all Sartana movies. This impressive release has hit shelves in the UK June 25, and in the US and Canada July 2 2018 and already gained some raving reviews and first reactions, including from our community in the forums. With a box like this it usually takes a while to get a detailed review, especially since in this case we didn't have access to a pre-release edition, and it takes some time of course to review five movies including all the bonus features.

Sartana: I am your pallbearer.

The cardboard box contains all five movies (click here to learn a bit more about the character of Sartana and this movie series) in a cardboard box, plus a small collectible booklet. All discs come in a slim-case with a reversible sleeve. One side is the Arrow-commissioned artwork, the other is the original poster motif (there is little debate among fans which one prevails).

The 55-page booklet is replete with nice color images from the film series, an in-depth essay on the films by Robert Curti, another by Howard Hughes chronicling the genre's rise and fall, and lastly a few words about the restoration of these films for the present release, offering some technical insight about the origin of the audiovisual sources and processes used.

So let's dive in, shall we? What follows are short reviews of the movies with a particular look at their presentation on these discs....

If You Meet Sartana... Pray for Your Death

Lasky (William Berger) and another band of thugs, among them Morton (Klaus Kinski) knowingly or unknowingly, find themselves on competing ends of an insurance scheme to screw over the stage coach gold transport, hatched by the local bank, his associate and a gang of bandits led by General Tampico (Fernando Sancho). What they didn't reckon with was Sartana (Gianni Garko), a mysterious stranger killing them all off one after another, playing them against each other and making sure that whoever swapped the cache of gold with rocks would eventually pay for it.... (click here to read a full review of the film)

This original vision of Sartana kicked off the whole series with a blend of sassy humor and cold blooded violence. Garko and Berger try to outdo each other with gimmickry and smarts, but both Sartana as well as Lasky take almost until way through half the movie to grasp what's going on and properly position themselves against each other. They are very unlike, Sartana being more like the snake like Morton, who exits the scene rather unglamorously quite early on. The overburdened script has its problems with logic in some spots, but ultimately, Sartana is a timeless classic in how it managed to pull off the sinister, dust and tumbleweed kind of stranger-kills-all spaghetti western with a good dose of humor right out of Clint Eastwood's playbook, spinning off an entire sub genre and probably earning director Gianfranco Parolini and Gianni Garko a coffin full of dollars. Having them all ride in and out of the same Roman sand pit from different angles must have saved them an extra nickel, but still, the director didn't return to the franchise and went on to produce a Sabata movie instead. Overall, a cult classic that still manages to entertain today.

The disc offers Italian and English audio options, both DTS mono tracks. I decided to watch the movie in Italian with English subtitles (always a good trick to get a full grasp of the movie since usually no version is like the other and you'll notice the dub isn't a precise translation of the original, which goes for most spaghetti westerns). The track is not entirely complete, there are a few tiny bits where the audio is English. Overall, its a decent sounding track with some noticeable crackling that creates a nice retro atmosphere. The English track sounds very similar, but has probably a tad more of a warmer tone and is a bit easier on the ears, the difference is minimal however. It is an excellent track. The image transfer on this disc is the "worst" of the box, objectively. Its a scan as good as the others but the material on hand was obviously in worse shape comparatively, so you see plenty of scratches, lines, speckles. The rest of the movie it is way better than during the opening credits, so tolerate those grindhousey looking bits, and then rejoyce how nice the rest of the picture looks. DNR and compression struggle a bit in the brighter, dustier exteriors but look great with closeups and most of the interiors. It's a marvellous transfer with just a few drawbacks. Rich colors (blacks almost too black), good contract and little edge enhancement. Sartana never looked this good.

The bonus features are plenty. Peckinpah-expert Mike Siegel, who also provided a German-language commentary on the German BluRay for The Great Silence, lends his expertise here (in English) for this full-length commentary. As always he's very knowledgeable, the commentary is full of trivia, technical information about filmmaking and historical facts. It makes for a great time also because Mike goes into the entire series, not just this one, starting with Blood at Sundown. But there is more: There's a rather funny new 22minute Interview with Gianfranco Parolini who is in great spirits reminiscing. Then there's a 16min visual essay to the many faces of the Sartana series by Jonathan Bygraves (a nice addition to our Sartana intro article by Simon). The finishing touches on this disc are a gallery of promotional article from Mike Siegel's archive. Pardon my french but that's a shitload of pictures.

I am Sartana, Your Angel of Death

This time, Sartana gets framed for a bank robbery by a group of murderous thugs, whose mysterious leader donned our hero's cape and gadgets. Sartana sets out to play off various thugs against teach other, including Bill Cochram (Federico Boido), but he's only slowly closing in on whoever was pulling the strings. It could be the Sheriff (Sal Borgese), the casino owner (Ettore Manni), one of the bounty hunters who are after him, including Holden (Klaus Kinski) and the evil Degueyo (Gordon Mitchell), or even his long time friend Buddy Ben (Frank Wolff).... (click here to read a full review of the film).

The disc presents the movie in a gorgeous looking transfer once again. This first sequel switches to a broader scope format, which does the movie justice. It looks impeccable, aside from some moments of faded colors and a few scenes where inferior material was used. Colors are clear, contrasts good (again, almost too good) and the print free of blemishes. Edge enhancement and DNR are only slightly visible. .The audio is again pretty solid. (TO DO: add some info how Italian compares to English here).

For special features, we're treated to an audio commentary by C. Courtney Joyner (screenwriter and novelist) and Henry Peake (editor for True West magazine), both Sartana enthusiasts and zealots.

Then there's "From the life of a stuntman", "violent tales for kids" and a gallery.

Included in the box set along with the five Bluray discs is an impressive 56 page full colour booklet containing 2 extended essays along with full cast and credits for each of the films and a host of photographs and poster art.

The first of the essays, “If You Meet Sartana...” by Italian film author Roberto Curti, charts the story of the Sartana series and central protagonist from the origins of the name in Alberto Cardone’s $1000 on the Black to the development of the character by Parolini and Garko using elements from the Bond franchise as well as influences from the comic strip crime fighter magician Mandrake. Curti gives interesting background info on each production, their budgets, personnel changes and places them in the context of their timing in the genre and in so doing provides a useful understanding of how the series came about, why it was so popular and why it has remained so enduring over time for fans of Italian westerns.

The second essay "Westerns Italian Style: Once Upon a Timeline" is from British author Howard Hughes and gives a more general history of the genre in year by year chronological order; highlighting the major releases, how they influenced ensuing productions, the boom years, and their eventual decline in popularity. This is an essay as much for the newcomer as the long term fan but still offers some interesting insights. In particular it illustrates the ever-present comedic element in the history of Italian westerns from the earliest pre Leone days to the post Trinity parody boom and the inevitable spoof of spoofs. The essay ends with a brief look at the melancholy end to the genre in the form of the Twilight Spaghettis.

The booklet is rounded off by a full description of each of the restorations which make up the disc contents of the box set, detailing the source prints used, the level of resolution attained and the restoration house which produced the finished articles.

Overall this booklet is an impressive addition to the films and makes for a nice little read that will inform the novice but still please the longer term fan of this fabulous genre.

This article was written collaboratively by: X, X, X, X and Sebastian.