The Four Gunmen Of The Holy Trinity Review 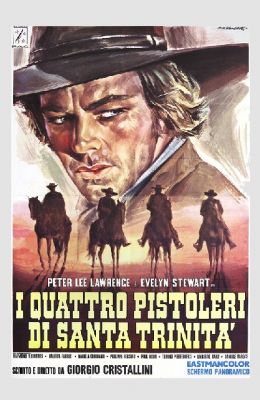 I won't lie, I picked up this western because of its cool title. As a seasoned genre aficionado I thought I knew what to expect (cool titles often fail to deliver on its promises) so I wasn’t that disappointed when I found out there are no four gunmen of Holy Trinity, just Peter Lee Lawrence carrying a sawn-off lever action rifle – fine by me, unusual weaponry is the inconspicuous aspect of few spaghetti westerns, which can always elevate rating, if other aspects (like sloppy screenplay), didn't shoot straight.

Anyway, Peter Lee Lawrence plays an ex-soldier George Shelley, now reporter heading for some reason towards the US/Mexican border, meanwhile chatting and playing a guitar with a recently befriended marshal (Phillipe Hersent), who is after some gun-trafficking low-lifes. Sooner than PLL can bewilder local fauna with another guitar solo, he has to put in use his rifle and unmount some highly suspicious riders pursuing a lonely woman, who recently has to live through some horrors that can happen in the Wild West. After some riding through snowy landscapes and explanations given why George Shelley rather uses dwarfed version of a Winchester rifle instead of a revolver, they all end up in an Inn amongst all kind of unusual characters following their own agendas. 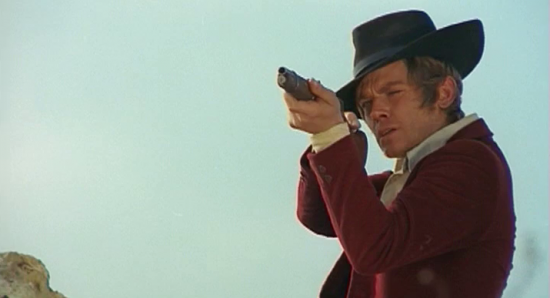 From this moment on, the movie takes place almost entirely in an interior of the hotel or surrounding area, so we can include this Giorgio Cristallini's first western effort among the indoor spaghetti western subgenre, combining such titles as Shoot The Living, Pray For The Dead (Vari), Stagecoach Of The Damned (Bosch), A Pistol For Ringo (Tessari) or Quinto – Fighting Proud (Klimovsky). Compared to Cristallini's second western You're Jinxed, My Friend, You've Met Sacramento with Ty Hardin it becomes apparent which one is more flawed and why. Somewhere in the middle of The Four Gunmen, things start, as it is often the case, to fall apart a bit: the characters seem to appear in a location they could hardly be present at the time, some protagonists choose more complicated resolution of a situation over simpler one, or we witness some weird transition between the scenes.

These are minor issues anyway, the next one is a bigger problem.

Such a weird jump in the storytelling might put a viewer off, but since we are almost at the end, I recommend to endure, because once Peter Lee Lawrence picks up his sawn-off repeater we are about to witness highly enjoyable, dramatic and unpredictable finale, actually one of the best I've seen in the genre, which make you forgive the movie some of its previous shortcomings, which can be blurred even more in your mind by the atmospheric soundtrack by Roberto Pregadio (depends if you like jazzy style music) and absorbing cinematography of Alessandro D'Eva, creating almost otherworldly visual - there's a beautiful shot of a whole dining room with all the occupants present, a short scene which make you wonder in which way the fate of every single participating character will turn out to be eventually – but rather don't believe in happy endings this time. 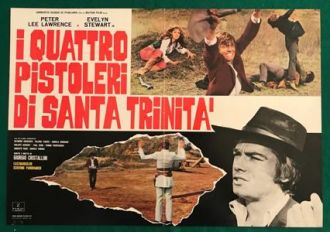 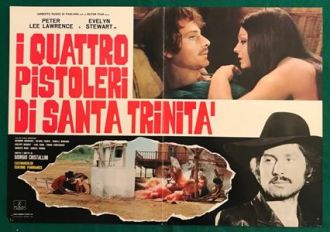 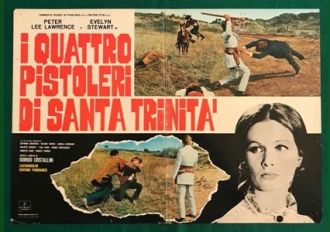 Retrieved from "https://www.spaghetti-western.net/index.php?title=The_Four_Gunmen_Of_The_Holy_Trinity_Review&oldid=113597"
Category:
Cookies help us deliver our services. By using our services, you agree to our use of cookies.