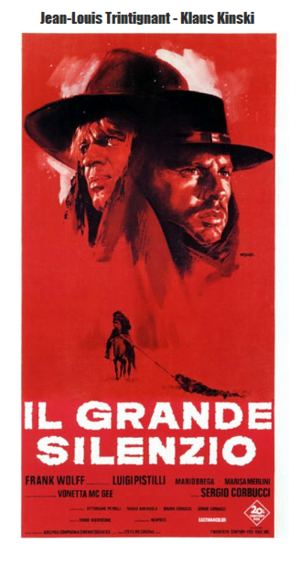 SPOILER WARNING: I try to avoid as much as possible to give away a film's outcome, but it's impossible to write about this movie without discussing its ending. So if you haven't seen The Great Silence yet, buy or order it today and return to this review later - Scherpschutter

The Great Silence, Corbucci’s masterpiece and today recognized as one of the best westerns ever made, was also his greatest deception. The film was denied a US release and did not fare particularly well at home, frustrating Corbucci’s desire to outshine Leone. Often called "that western in the snow" the film is set in Utah, near the end of the 19th Century, during a very cold winter.

Outlaws have taken shelter in the hills around the town of Snow Hill, but they must descend into the valley for food. Bounty hunters simply waylay the outlaws in order to slaughter them and to collect the bounty. Their leader, Tigrero (called Loco in the English version), has joined hands with corrupt banker (and justice of peace of the region) Pollycot, who wants to ‘clean up’ the valley. The only opposition comes from a mysterious mute gunslinger called Silence, who always draws second, but shoots first. A black woman whose husband is killed, offers Silence $ 1000 to kill Tigrero. Silence accepts the job and becomes ‘a bounty hunter who hunts bounty hunters’, but when he tries to provoke Tigrero to a duel, the latter puts aside his guns because he knows Silence would never shoot an unarmed man. The sheriff wants to hand over Tigrero to the authorities, but outside of town he is outsmarted by the ruthless bounty killer. When Tigrero returns to Snow Hill there is nobody left to prevent a massacre: Silence was already wounded during the shootout in the saloon and later Pollycot has scorched his hands, so he is no longer able to use his gun ...

According to Corbucci it was Marcello Mastrioanni who gave him the idea of the mute gunslinger, when the actor told him that he had always wanted to do a western, but unfortunately didn’t speak English. When Corbucci first met Trintignant, who didn’t speak English either, he decided that this was the moment to turn the taciturn spaghetti western hero into a mute. The name Silence is not only referring to the character’s incapacity to speak, but also to that "great silence" that is waiting for us all on the other side. 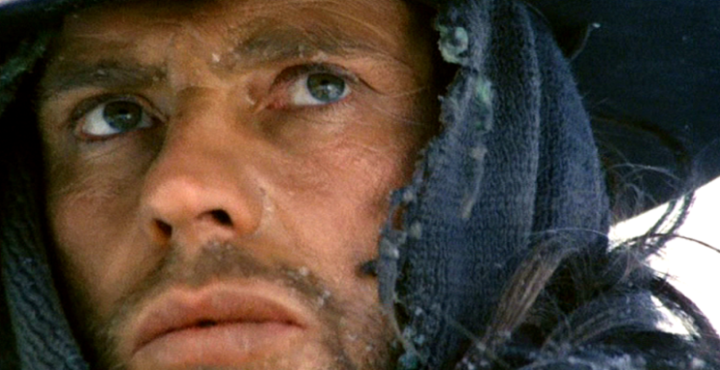 To Corbucci the movie was, like most other westerns he made, a political movie about the rich paying scum to kill the poor. The outlaws stole to survive, and only became ‘wanted men’ because banker Pollicot put an exceptionally high price on their head. Corbucci had also often underlined the idea of the futility of one man’s endeavours to change the world, which was usually interpreted as an anti-christian (in Italian terms: anti-catholic) statement. In this view Silence’s failure to defend the poor and his violent death, refer to Jesus Christ, more in particular to a popular notion among Marxists to see Christ as an unsuccessful revolutionary, a Che Guevarra avant la lettre. The scorching of his hands might be another motive to link Christ to Guevarra by means of Silence: Christ’s hands were penetrated when he was crucified, while Guevarra’s hands were chopped off and sent to Fidel Castro after his violent death.

Two films that are often mentioned as an influence on The Great Silence are Day of the Outlaw (André de Toth, 1959) and Black Sabbath (I Tre volti della Paura/ Mario Bava, 1963). Corbucci himself said he got the idea of horses in the snow when watching John Ford’s Cheyenne Autumn (1964). Robert Wise's Blood on the Moon (1948) might have been of influence as well; Robert Mitchum was one of Corbucci’s favourite actors, a visually striking scene is set in the snow, there‘s a violent confrontation in a darkened saloon, and Mitchum’s character is as equally mysterious as Silence. Corbucci was also very fond of Samurai movies. Silence is very reminiscent of a wandering samurai who stands up for justice in a perverted world. He’s also very fond of his handgun, a 9mm broom-handle Mauser, which he keeps in a pistol case that looks very much like a protective sheath. I know he has been given a more personal motivation, in a flashback in which his vocal cords were cut by bounty hunters, in the presence of Pollicot, but I always had the idea that this scene was an afterthought, to make things more palpable to the audience. Slitting a boy’s throat in order to cut his vocal cords, is by the way a rather bizarre way to silence him; it seems unlikely the boy would survive such brutality.

In an introduction to the movie, Alex Cox says that the Silence part originally was intended for Franco Nero, so Corbucci chose Trintignant out of need (1). It has also been suggested that Trintignant was imposed on him by the French production company. More identified with art house movies, and usually cast as an unworldly, taciturn outsider, Trintignant seems the ideal choice to impersonate the spaghetti western’s most enigmatic anti-hero. We are both fascinated and riddled by him, from the moment his silhouette slowly takes shape in the blistering snow storm until his distressing death scene in the deserted streets of Snow Hill. Still many people think the film belongs to Trintignant’s co-star Kinski as Tigrero, the sadistic leader of the bounty killers. Along with his more acclaimed part in Herzog’s Fitzcarraldo (1982), this is certainly Kinski’s most memorable performance.

With two such performances by the leading actors, you’d say no supporting actor would be able to leave a lasting impression. But both Luigi Pistilli and Frank Wolff managed to do so. Once you’ve seen Pistilli, the man you love to hate, as the homicidal banker, you’ll know why money sometimes is called the root of all evil. I have always liked Wolff (some others haven’t) as the fundamentally good-natured and skillful, but nevertheless rather clumsy sheriff, who is asked by the governor – who is about to pardon the outlaws – to restore order in the valley. Allegedly a bizarre incident took place between him and Kinski before filming started. Kinski addressed Wolff with words like: “I don’t want to work with a filthy Jew like you; I’m German and hate Jews.” Wolff, who was indeed Jewish, could barely be stopped from strangling Kinski, and never said a word to him during the entire production, unless it was written in the script. Kinski declared later he only wanted to stimulate and help Wolff, who was supposed to hate him in the movie … (2)

The movie is famous for its setting in the snow, but the one thing that really sets it apart, is the bleak ending in which the cliché that in a western the good guy always wins is turned upside down. Incidentally, Kinski thought both he and Trintignant were baddies in the movie : Trintignant kills for money too and shows a very dark side by provoking his opponents to draw first and subsequently killing them in cold blood. Some have adopted this point of view (Alex Cox refers to it in the above mentioned introduction), but to most people the movie still is a confrontation of good versus evil, with the bad guy winning. In the bleakest finale of all westerns, everybody who can be called remotely good, is slaughtered, while the baddies ride off into the sunset (or the sunrise), free from care: the snow will preserve the corpses, so they can come back later to collect them. 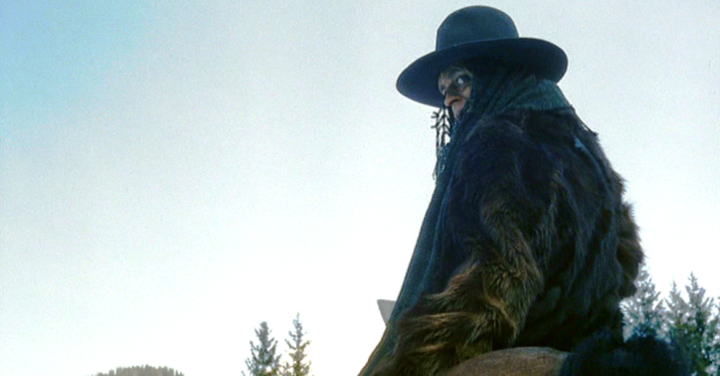 The film was shot on location near Cortina d’Ampezzo in the pre-Alpes mountain range of the Dolomites, the town scenes and indoor scenes in the Elios studios. Watching the movie, we almost feel the icy cold of the blizzard tormenting the surroundings of Snow Hill. Oddly enough some of the snow we see, is actually shaving cream. Ennio Morricone’s score, gloomy, haunting and beautiful, is the perfect antithesis of his score for Leone’s dollar-trilogy. As said, The Great Silence was not very successful in Italy, even though several reviews were positive. Very violent for it’s time, with thumbs shot off and blood dripping from fractured skulls, the film got an ’18 rating’, which meant young Italians, who loved spaghetti westerns, weren’t allowed to see it. And those Italians who were allowed to see it, didn’t like the bleak ending: in Sicily a man literally fired at the screen out of rage when Silence was killed. Nearly everybody who has commented the film, has said the alternative happy ending was shot for other markets, mainly North Africa and Japan, but it seems impossible to find any evidence that it was actually ever used. (3).

Not very successful initially, the film’s reputation has grown over the years, especially in the US, where it was never released theatrically. Robert Altman must have seen it before filming his depressing McCabe & Mrs. Miller (1970) and scenes, ideas and properties have turned up repeatedly in the films of Clint Eastwood (who was often said to be considering a remake of the movie): The Mauser in Joe Kidd, the snow-covered slopes in a key scene of Pale Rider (in which Clint’s character is introduced in a similar way as Silence is introduced by Pauline) and the dark, uncompromising atmosphere in Unforgiven, a film that tries hard to be as de-mythologizing as Corbucci’s masterpiece. It’s also one of the favourite films of Quentin Tarantino.

I saw the film for the first time during the eighties and remember how I was completely blown away by the bleak ending. In the course of the years, after multiple viewings, its impact has of course diminished, but the film still looks and feels as something the genre had never done before and would never do again. It’s one of those films that change a moviegoers life forever: once you wandered through the icy and lonely streets of Snow Hill, no western, no film will ever be the same. 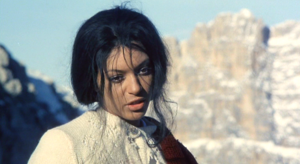 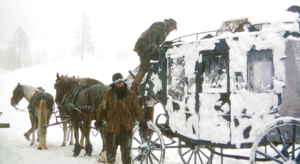 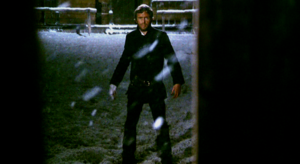 So far the alternative "happy" ending, added as an extra to most DVD releases, had always been as silent as the film’s titular hero. A few gunshots were heard on some versions of it, but no voices. However, recently a spoken version popped up on the Italian Medusa release. The quality of the audio varies, some lines are very clear, others are quite hard to decipher (luckily there are subtitles HOH). From a technical point of view, it’s a great scene, with brilliantly staged, vintage Corbucci action, but the lines are horrible and the scene seems to betray the entire movie. It will also give you the feeling you’re entering some kind of alternative universe, in which the outcome of familiar events has been radically altered: Nixon beat Kennedy in the 1960 elections, the Germans never won a World Cup, Elvis lives, and so does Silence. You can watch this ‘sound version’, with an English and German translation of the Italian dialogue here : The Great Silence – The Alternative Ending