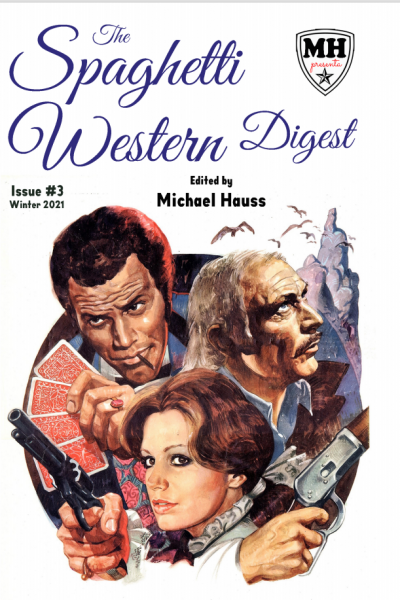 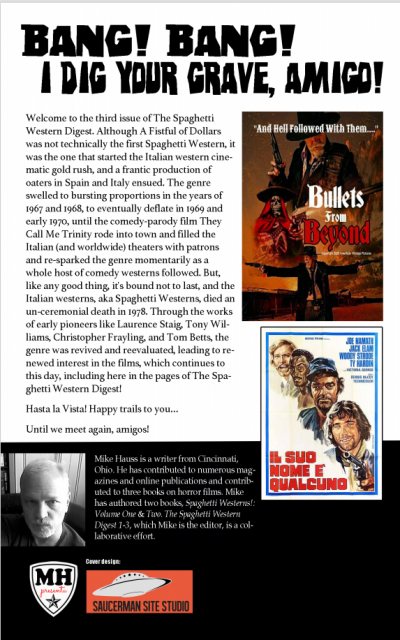 Welcome to the third issue of The Spaghetti Western Digest! In this issue, we include a wealth of interviews with Enzo Castellari, Austin Fisher, Fred "The Hammer" Williamson, Lee Broughton, Mike Olafson, Terence Denman, Sebastian Harrison, and Mike Forest.

Tom Betts looks at the Beginning and the end of the Spaghetti Western Genre. Eugenio Ercolani writes about and interviews the legendary Enzo Castellari. Dennis Capicik reviews a fistful of films. Steve Mason weighs in on the Fred Williamson, Spaghetti-influenced film Boss! Pete Chiarella takes a look at Take a Hard Ride and its place on 42nd street. Steve Mason rides again with a look at the real Chen Lee and the film The Fighting Fists of Shanghai Joe. Included is a Retro-interview with Walter Barnes from the pages of Tom Betts' Westerns... All'Italiana!. Tom Prickette looks at the cutting and pasting of Sartana. Tony Nash has a look at A Pistol for Ringo, and My Name is Pecos. Steve Fenton returns with For A Few Reviews More. Professor Van Roberts reappraises the much-maligned The Last Rebel. Mike Hauss Looks at the western films of Mario Bianchi. In the first of its kind, Steve Fenton and Michael Ferguson list the unmade Spaghetti Westerns. And Tom Betts answers the question, "Who is Ann Collin." And Phillipa Berry shares some then, and now location shots from the film Take a Hard Ride!

And there is so much more in the pages of The Spaghetti Western Digest... Do you have them all?

Retrieved from "https://www.spaghetti-western.net/index.php?title=The_Spaghetti_Western_Digest_Issue_3&oldid=122533"
Category:
Cookies help us deliver our services. By using our services, you agree to our use of cookies.