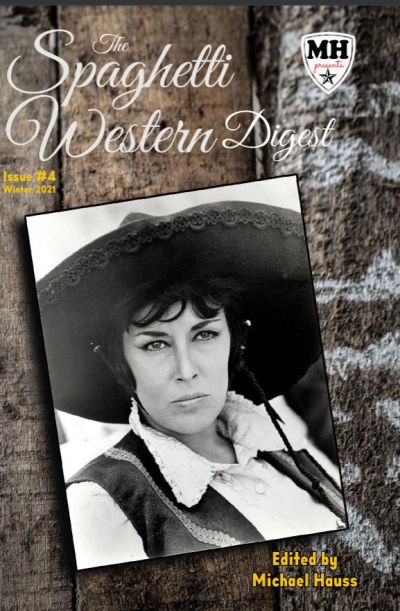 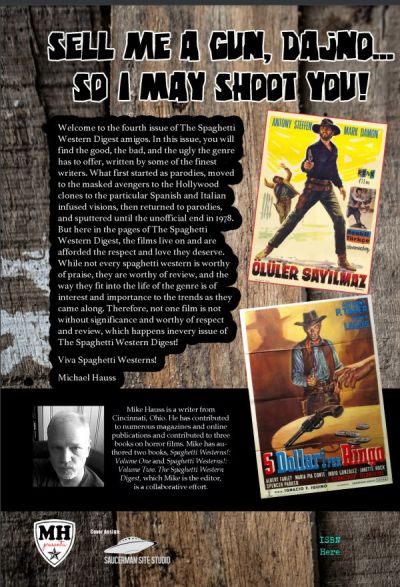 Tom Betts wrote the introduction and contributed a piece on the mysterious Dean Reed. Tom Prickette writes about Spaghetti western movie-tie-ins and shares some unbelievable content on the great Lee Van Cleef. Steve Mason does a deep, deep dive into the film A Stranger in Town. Tony Nash reviews the films Massacre Time and The Day After Tomorrow. Pete Chiarella writes about The Stranger and the Gunfighter and lends firsthand perspective to its place on the fabled 42nd street. Van Roberts does another of his legendary deep dives into the classic western Death Rides a Horse. Dennis Capicik reviews the films The Ballad of Django, Lobo the Bastard and Run Men! Eldorado is Coming to Trinity. Michael Hauss reviews the films Nevada Joe, One Dollar of Fire, Five Dollars for Ringo, Rio Maldito, El Puro and Twenty Paces to Death. Steve Fenton contributes stellar reviews including: The Fat Brothers of Trinity, Fabulous Trinity, To Die for a Dollar in Tucson, Patience Has a Limit, We Don’t, A Place Called Trinity, Death Rides Along, Adios Hombre, And the Crows will Dig Your Grave, Anything for a Friend, Arizona Kid, Ben and Charlie, Between God, The Devil and a Winchester, Beyond the Law, Challenge of the McKenna, China 9, Liberty 37, Dead for a Dollar, Dead Men Don’t Count, Diabolical, Garden of Venus, Go for Broke and Sons of Trinity.

Mike Hauss writes about the early Spaghetti’s and their U.S. television history. Also included is an interview with one of the best writers/researchers in filmdom, Matt Blake.

Retrieved from "https://www.spaghetti-western.net/index.php?title=The_Spaghetti_Western_Digest_Issue_4&oldid=136162"
Category:
Cookies help us deliver our services. By using our services, you agree to our use of cookies.