The Spikes Gang was shot in Spain, but apart from a cameo by Ricardo Palacios (as a shopkeeper who's also a dentist!) there’s very little that will remind you of a spaghetti western. Instead it’s much closer to revisionist westerns like The Culpepper Cattle Company (1972, Dick Richards) or Bad Company (1972, Robert Benton), about teenagers leaving home and trying to make a living out there, in the Wild Wild West, as either a cowboy or an outlaw (some have even called it a sequel to Bad Company). The youngsters are played by Gary Grimes, Ron Howard and Charles Martin Smith, three of the most familiar young faces of the decade.

In the opening scene, three young farmhands stumble upon a wounded man, who turns out to be the infamous bank robber Harry Spikes. They nurse him back to health, and one of them, Grimes, even gives him his horse. He is severely punished for this by his father, but the stories told by the bank robber, have turned the hard-working, obedient boy into an angry young man, western style. He runs away from home and asks the other two to join him and ‘Go get lucky!’. They soon find out how difficult life is out there, and then, all of a sudden, Grimes decides to rob a bank. The robbery goes bad and the boys are forced to fly to Mexico, where they end up in jail for a minor offence. Spikes, who accidentally rides into town, bails them out, and eventually accepts the grateful, worshipping boys as the members of his ‘gang’.

For most part, The Spikes Gang plays like a comedy, but it’s still a revisionist western, the light-heartedness of Spikes playing the substitute father for the boys, is only temporary. The ending is both grim and cynical. It may remind some of us of the ending of Tonino Valerii’s Day of Anger, with pupil Gemma turning against master Van Cleef, but – as said – this is no pseudo spaghetti western, it’s a full-blooded, revisionist western, in which characters find only redemption in death. This ending is also a denial of the idea – suggested in several movies of the period – that there is some kind of honor among thieves and outlaws. Grimes gives his former mentor – now his nemesis – a chance, and pays the full price for it. For most part it may play like a comedy, but in the end there’s nothing but death and destruction.

The Spikes Gang wasn’t very successful when first released, neither with audiences, nor with critics. This combination of comedy and ultra-bleakness may have worked against the movie. Anyway, recent reviews have been more positive. The best thing about the whole thing is Marvin, who really turns in one of his finest performances, mumbling his wise-cracks and worldly wisdom from under his gnarled moustache. He’s funny, but also tragic as the aging outlaw who accepts the boys as his gang because, being an outlaw, he never had a real family life. In a few brief, well-written conversations, we get a stirring view of the old man’s past, the most touching (and unsettling) moment Marvin’s answer to the question what happened to his wife, the one person who taught him everything about life: "What happened to Mrs. Spikes?" Marvin: "I killed her." Unfortunately the younger actors fare less well. Martin Smith’s simpleton who needs glasses to shoot straight is a bit too stereotyped, and Howard never was a great actor (he would do much better as a director). Grimes – all eyes and despair – is a perfect physical counterpart for Marvin, but the transformation from the innocent and worshipping boy into the angry but terrified young man asks for more than eyes and looks alone.

All in all this a good film, overlooked by contemporary audiences and underrated by contemporary critics. It therefore deserves to be rediscovered, but please don’t expect a masterpiece; the film has several insightful moments, but also resorts a few times too many to clichés to make a point, such as Grimes having a flashback to his moralistic – but caring - father in his dying moments.

How to watch it: There are several decent releases of this movie, see for them: The Spikes Gang: Available DVDs. I watched the Dutch R2 release by Lime Lights Pictures in their Hollywood Classics Collection. The image is a bit grainy but otherwise okay, the 2.0 DD audio track is no challenge to your sound system, but does the job. There are optional Dutch subtitles. 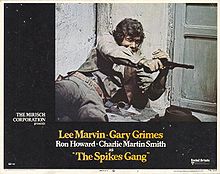 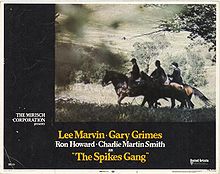 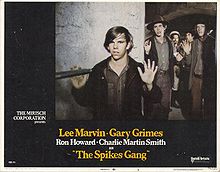