Back to The Top 20 Essential Spaghetti Westerns, Part 1 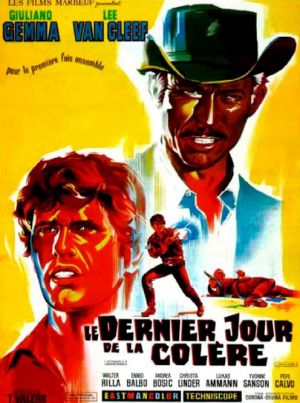 This film looks a little like Death Rides a Horse. It uses the master-apprentice plot and stars Lee van Cleef. But in that film hate dissolved into friendship, in this one friendship turns into anger and rage. Gemma, a pariah who may clean up people's shit, dreams of being a famous gunfighter. When Frank Talby (Van Cleef) comes into town, he becomes his apprentice and soon he is a respected man. But then Van Cleef kills his former friend ... A great psychological spaghetti western. Probably Giuliano Gemma's best performance.

Miscellaneous: one of the few spaghetti westerns based on a novel, Der Tod ritt Dienstags by Ron Barker. Still many critics have pointed out that Edward Dmytrick's fifties western Warlock was a major influence too. Warlock was a very popular movie in Italy and may also have influenced Leone when he chose Henry Fonda for the part as the genre's coldest villain, Frank from Once upon a Time in the West.

Trivia: the British VHS version of this movie, called Gunlaw, was cut by more than half an hour!

Great line: Never put yourself between a pistol and its target. 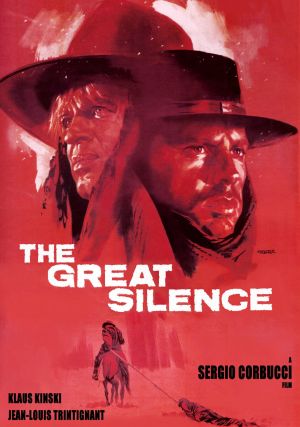 During a cold Utah winter, outlaws have to leave their hiding place in the mountains. In the valley bounty killers are waiting to make an easy kill. The 'outlaws' stole out of hunger and became only criminals courtesy of a corrupt justice of peace, who put an exceptionally high price on their head and works together with the bounty killers. The only one who tries to defend the outlaws, is a mysterious mute called Silence, who draws second but shoots first. This is the bleakest and most nihilistic western you'll ever see, that pulverizes the old cliché that in a western the good man always wins. Today this is generally considered to be the best non-Leone spaghetti western.

Miscellaneous: French art-house actor Jean-Louis Trintignant was a very offbeat choice as a gunslinger, but he's very effective. Still some think this film belongs to Klaus Kinski as the sadistic leader of the bounty killers. It is said that it was Marcello Mastroianni who originally came up with the idea of a mute gunslinger because he wanted to do a western, but didn't speak English.

Trivia: the film was shot near Cortina d'Ampezzo, a winter sports resort in the Dolomites, but a lot of the snow you see, is actually shaving cream.

Great line: They call him Silence, because wherever he goes, the silence of death follows. 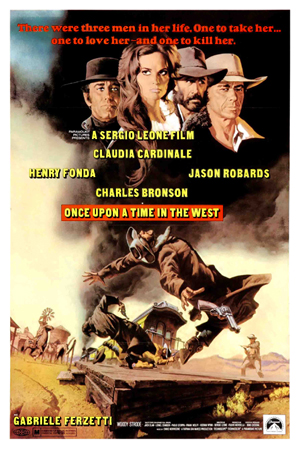 The original title of this landmark movie should have been translated as: Once upon a time, the West (not in the West). Leone intended his movie as a reverie on the End of the West as well as a comment on the history of the western movie. The two great themes that have determined the western over the years, are present: the way the West was won and the vengeance tale. But the way the way the West was won is not glorified, and the avenger in this movie, is man so consumed by revenge that he has no longer an identity of his own: when asked for his name, he answers with dead people's names, people who's violent deaths he wants to revenge ... But the final message is an optimistic one, with Claudia Cardinale founding the matriarchate. If you have never heard of this movie, you must have been living on another planet during the last forty years ...

Miscellaneous: The film start with the longest credit sequence in history: a minute pantomime for three gunmen waiting for a train, while the credits pass on the screen, following the rhythm of the casual events shown.

Trivia: originally Leone thought of casting Eastwood, Van Cleef and Wallach as the three gunmen waiting for the train.

Great lines: (One of the gunmen) Looks like we shy one horse. (Harmonica) No, you brought two too many. 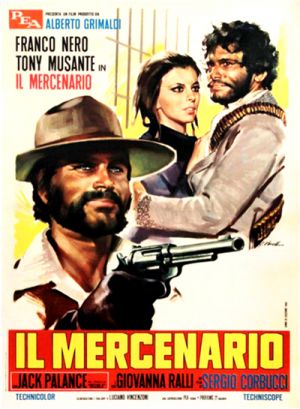 With a story originally based on a play by Bertold Brecht, we're very much in the world of the political western here. Polish mercenary Sergei Kowalski (Nero) helps Mexican peasant Paco Roman (Musante) to become a real revolutionary; after a series of mutual experiences, they even become friends, but the water between them is too deep, so finally they go their own way. Watch out for Jack Palance as a sadistic and homosexual mercenary fighting on 'the other side' and Giovanna Ralli as the peasant girl Columba, who joins the revolution and outsmarts everybody. Humor, action and excitement in exactly the right measurements. Probably the best Zapata western, a joy from start to finish and the ultimate proof that intelligent cinema can be a lot of fun.

Miscelleneous: Morricone's score is one of the very best for a non-Leone movie, the track The Arena among his four or five best individual tracks. Nero's ultra-cool and ultra-chic look had a strong influence on those well-dressed and sophisticated heroes like Sartana and Sabata, that would soon take over from the unshaven, poncho clad anti-heroes that used to populate the genre.

Trivia: Nero was originally cast as the Mexican, but he became the Polish mercenary when Jason Robards turned down the part.

Great lines: What does it mean to make a revolution?

IF YOU MEET SARTANA, PRAY FOR YOUR DEATH (1968, Gianfranco Parolini) 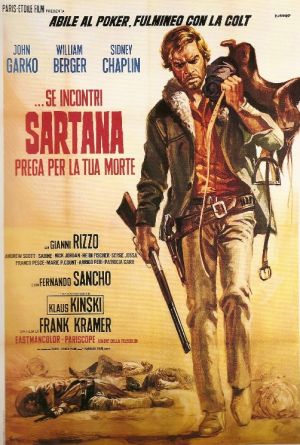 Halfway between the troubled Django and the light-hearted Trinity, as black clad as Colonel Mortimer and as cool and chic as Sergei Kowalski, this is the spaghetti western's answer to James Bond. Garko is accepted by most as the one and only Sartana, but after Carnimeo had taken over from Parolini, the latter started his own franchise with Van Cleef as Sabata, who is also some kind of Sartana... Tongue-in-cheek, deliriously violent and with an intricate or even incomprehensible script, those Sartana/Sabata movies represent the spaghetti western at his weirdo best. See at least one of them. And if you like it, you'll probably get addicted to the series. There seems to be a good article on these films somewhere around here...

Miscellaneous: Carnimeo took over from Parolini, Hilton took over from Garko, Brynner took over from Van Cleef, and the first character called Sartana, played by Garko, was a villain and died at the end of Alberto Cardone's Mille dollari sul Nero. Everything about this guy Sartana is nearly incomprehensible...

Trivia: Actually, there even was a Sartana before Garko: in the Italian version of Day of Anger, Giuliano Gemma's mule was called Sartana... 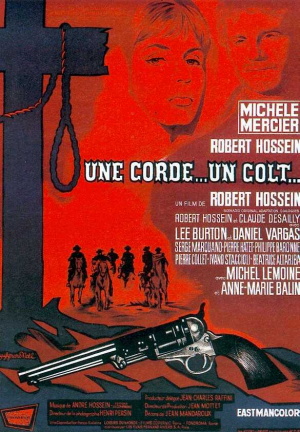 Hossein is a mysterious loner, living in a ghost town. When Mercier's husband is killed by a corrupt landowner and his gang, she asks him to avenge her. He reluctantly complies with her request (mainly because he still has feelings for her, an ex-lover of his) and infiltrates the gang. Subsequently he abducts the landowner's daughter and let some scum have their way with her (!). It comes to a final showdown that will leave very few alive. With very little dialogue and full emphasis on mimics and suppressed feelings, this predominantly French production probably is the most atmospheric spaghetti western (and along with The Great Silence the most depressing).

Miscellaneous: This is director Hossein's only western, but a few years earlier he had made some kind of Zapata movie, The Taste of Violence (1961), set in a fictional country.

Trivia: The German release of the movie must be one of the most precious releases of any spaghetti western ever. Hopefully the Japanese won't feel obliged to formulate an answer by raising the price of their releases! 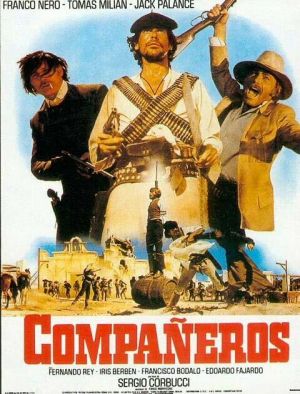 Often called the pendant of A Fistful of Dollars, this film seems to conclude the golden years of the spaghetti western, like Leone's movie initiated them six years earlier. Very close to The Mercenary, made two years earlier, this is a equally eventful, but slightly darker movie. Whereas Sergei Kowalski saved the life of Musante, so that he could continue his revolutionary activities, Yodlaf Peterson (again played by Nero) turns back to El Vasco (Milian) and his compañeros, the moment the Federal army - much stronger than the revolutionary forces – are about to attack. This is usually interpreted as an act of self-sacrifice, but some insist a more optimistic reading is possible...

Miscellaneous: In the first versions of the movie so much obscene language was used, that in Bologna a complaint was lodged against Corbucci. When he promised to re-model dialogue a little, the complaint was withdrawn...

Trivia: In both The Mercenary and Compañeros Franco Nero was dubbed in the Italian version because he was not available when those versions were recorded. 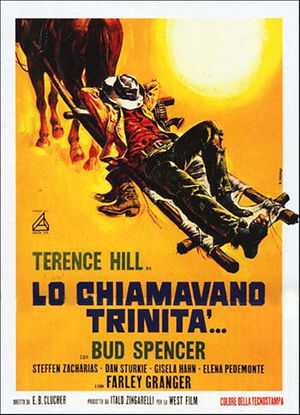 Often called 'the film that saved Italian film industry and killed the spaghetti western', this comedy made international stars out of blue-eyed Hill and grumpy fatso Spencer. The duo comes to the aid of peace-loving Mormons, who must defend themselves against corrupt land grabbers. Experts don't agree which Trinity movie is the best, this one, or the sequel, Trinity is still my Name. But maybe that question is purely academic: if you don't like Hill and Spencer, you don't care, and if you do like them, you will want to see both films.

Miscellaneous: Before making the Trinity movies, Hill and Spencer already had appeared together in a loose trilogy directed by Giuseppe Colizzi. In those films Hill played a character called Cat Stevens.

Trivia: Spencer may be a grumpy fatso in the movies, he did represent his country as an Olympic swimmer ... 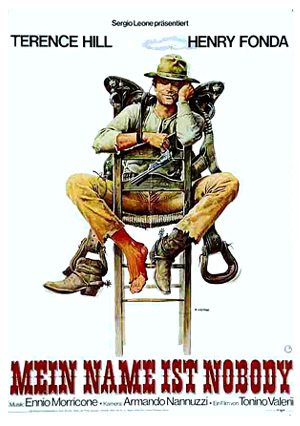 Jack Beauregard (Fonda) is the fastest gun in the Whole Wild West. Is really nobody faster? No, nobody. Nobody (Hill) is a young man who idolizes Jack Beauregard but knows that his idol is in need of a special act that'll make him a real legend: he wants him to face the famous Wild Bunch all alone. Beauregard is tired of being challenged by young men who want to prove that they are faster than him, so he faces the Wild Bunch and kills all members, by shooting at their saddle bags, in which they carry dynamite sticks. Finally Beauregard is 'shot' in an arranged duel, so he can travel to Europe ... Like Once upon a time in the West and Peckinpah's The Wild Bunch, this is a reverie about the end of the West, only this time in the shape of a comedy.

Miscellaneous: Although the Wild Bunch is without a doubt reference to Peckinpah's movie, the way the gang is depicted here, is closer to the historic gang called the wild bunch than the legendary bunch that faced general Mapache.

Trivia: Sergio Leone came up with the idea and directed some scenes uncredited. The film is often erroneously called a Leone movie. Steven Spielberg once said that this was his favorite Leone...

Click here to ready my full review of the movie. 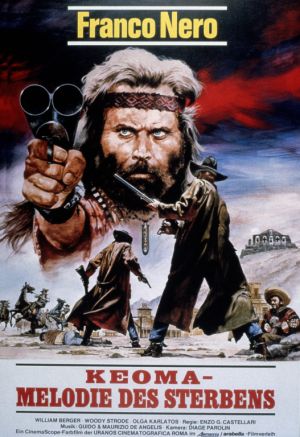 Although not the last spaghetti western, this is the real swan song of the genre. Nero is a half-breed Indian who comes home after the civil war and discovers that the plague has broken out and that his hometown has been turned into a kind of concentration camp. A mystical, violent and poetic movie, with influences of Peckinpah, Shakespeare and Impressionism.

Miscellaneous: Castellari said afterwards that they tried to write the script in the fragmented, suggestive way Leonard Cohen and Bob Dylan write their songs. The color palet of the film was influenced by the impressionist paintings of Monet. Castellari knew how to pick his models...

Trivia: Woody Strode proposed the title: he had read it on the cover of a book. The book was the autobiography of ... a prostitute.