Difference between revisions of "They Call Me Lucky" 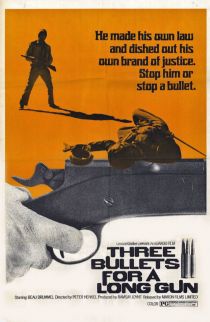 Set in the Mexico Colorado and the Gila desert, the story tells of one man’s vengeance and the tragic aftermath of his hatred. Outside the bank of Yuma Diaz’s wife is killed by a stray bullet fired by a Mexican pistelero. Juan Diaz removes the silver bullet from his wife and swears on her dead body to get the killer. Lucky's band of outlaws then holds a rich girl, Beth, for ransom and plan’s a new series of robberies. Meanwhile, Juan is found dying in the desert by Lucky and is brought to his camp where he’s nursed back to health. Beth has fallen in love with Lucky and the two decide to marry. A preacher, who is actually a bounty hunter, is brought to the camp to perform the wedding ceremony. While staying at the camp he teaches Juan how to shoot a pistol. After another bank robbery Lucky and his sidekick Chino return to the camp where he is confronted by Juan and he kills both Chino and Lucky. In turn the preacher kills Juan and as he rides away Beth shoots and kills him.