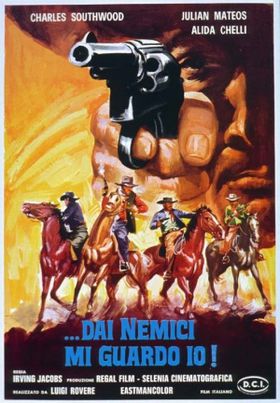 An adventurer receives a special dollar from a dying Confederate officer and is told that there are two other similar dollars, all three with an inscription. When combined, the inscriptions on the coins reveal the whereabouts of a large pile of gold.

Three Silver Dollars (See Database Page) is one of the several serio-comic spaghetti westerns of the treasure hunt kind, modeled after Sergio Leone’s The Good, the Bad & The Ugly. It was based on a story by Bruno Corbucci, who also co-scripted. Amendola had co-scripted several movies directed by one of the Corbuccis, but his only contribution to the western genre as a director had been a comedy set in the Old West called Il Terrore dell'Oklahoma (1959). Three Silver Dollars would remain his only spaghetti western.

The film tells the story of an adventurer, Alan Burton, who becomes the only survivor of a bloody - and very unusual - stagecoach robbery: he kills all the robbers after the robbers killed all the passengers. A dying confederate officer gives him a silver dollar and tells him there are three similar dollars, all with inscriptions; when combined, the inscriptions reveal the hiding place of a large stash of gold, belonging to the Confederacy. A mean gang leader called El Condor is in possession of the second dollar and has hidden the third one in a save place. Burton is captured by El Condor but saved by Hondo, a Mexican who seems to have his own plans ...

There’s nothing new here but Three Silver Dollars offers enough action and adventure to keep fans of the genre entertained; overall it’s a pleasant ride that even manages to look a little 'different’: the Spanish Almeria locations and Italian western towns all look familiar, but the dirty and dusty look of the Italian West is largely absent here, the film looks remarkably ‘clean’ and also lacks the ritual build-ups to shootouts that Leone had introduced to the genre. The finale has hardly any spaghetti western feeling; it’s the film’s only real surprise (and therefore I won’t give it away), but it’s also so sudden and anti-climactic, that it will be a bit of a letdown to most viewers. 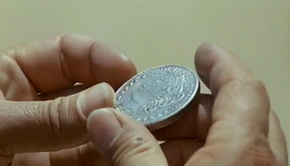 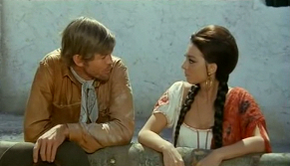 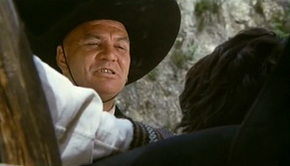 Charles Southwood (probably best known for his campy performance as a Cossack in They Call Me Hallelujah) and Mirko Ellis are quite good as the ‘good’ adventurer and the ‘bad’ gang leader. Julian Mateos successfully hams it up as the 'ugly' man in the middle (ugly in a metaphorical sense). Mateos was a Spanish actor and producer who had studied philosophy and dramatic arts (at the universities of Salamanca and Barcelona) (1). He had replaced Horst Bucholz as the Mexican member of the Seven in Return of the Seven and also appeared alongside Sean Connery and Brigitte Bardot in Shalako. Pietro Ceccarelli, the bald heavy from several Gemma movies, is a great henchman and Lorenzo Robledo makes one of his furious, ultra-short appearances: he is tortured, strangled and shot, and still manages to give us the impression that he’s dying faster than his own shadow. The film's reputation was damaged by a horrendous English dub, with lines like “What’s a girl like you doing in a place like this?” and Southwood’s love interest, the Mexican girl, sounding like a street-wise film noir broad (2). I watched the film in French and apart from some lip-synch problems the French dub was fine (French dubs usually are). By the way, Alida Chelli, who plays this street-wise señorita, is composer Carlo Rustichelli’s daughter.

Retrieved from "https://www.spaghetti-western.net/index.php?title=Three_Silver_Dollars_Review&oldid=115062"
Categories:
Cookies help us deliver our services. By using our services, you agree to our use of cookies.