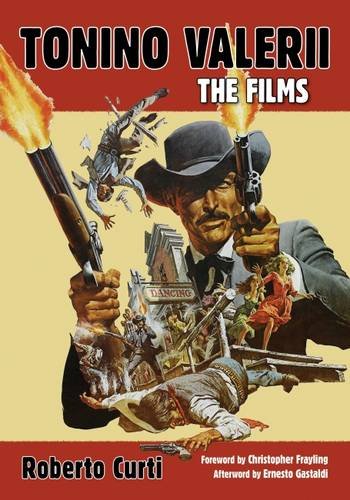 Tonino Valerii is one of Italy's best genre film directors. Starting out as Sergio Leone's assistant on For a Few Dollars More (1965), he went on to direct spaghetti westerns that stand out among the most accomplished in their class--Day of Anger (1967), The Price of Power (1969), A Reason to Live, a Reason to Die! (1972) and My Name Is Nobody (1973). He also directed the outstanding giallo My Dear Killer (1972). This book examines Valerii's life and career in depth for the first time, with exclusive interviews with the filmmaker, scriptwriters and actors, and critical analysis of his films.

Roberto Curti (born in Parma, Italy, 1971) is freelance writer and film historian specialized in Italian and European genre cinema, and has published a number of books in Italy, Spain and the United States, including "Italian Crime Filmography 1968-1980", "Italian Gothic Horror Films, 1957-1969" and the upcoming "Tonino Valerii: The Films". He is a contributor to "Il Mereghetti. Dizionario dei film" (Italy’s best selling film dictionary, edited by film historian Paolo Mereghetti, currently on its tenth edition) and editor of the monthly magazine “Blow Up. Rock e altre contaminazioni”. He has been a regular contributor to the cult magazine “Nocturno Cinema“ and has taken part in a number of International publications on Italian and European genre cinema, as well as monographic volumes dedicated to various filmmakers (Dario Argento, Mario Bava, Walerian Borowczyk, Jesús Franco, Lucio Fulci, Carlo Lizzani, Guy Maddin, Paolo Sorrentino, Roger Vadim, Agustí Villaronga… ), in Italian, Spanish and English language. He lives in Cortona, Italy.

Retrieved from "https://www.spaghetti-western.net/index.php?title=Tonino_Valerii:_The_Films&oldid=105089"
Category:
Cookies help us deliver our services. By using our services, you agree to our use of cookies.