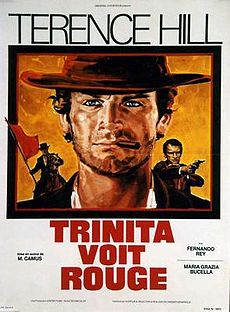 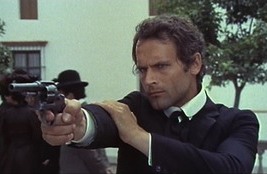 Technically this is not a spaghetti western, not even a western. It’s set in Spain, and the script is (loosely) based on actual events, which took place at the beginning of the 20th Century in Andalusia, when so-called campesinos, small farmers and daily laborers, instigated by anarchist agitators, stood up against the rich landowners who were exploiting them (1). The film was a bit long in the making; one Italian co-producer withdrew from the project and another was only willing to finance it if some changes were made to the script. It’s a rather serious, even ponderous film, but it was presented in many countries as a Trinity movie, causing a lot of confusion among moviegoers.

Even if the film is not a spaghetti western, there are some similarities to the Zapata westerns. It has the characteristic story element of the expert who is hired by the rich but then changes sides for idealistic reasons. In this particular case, there are two experts, no mercenaries but hitmen travelling from one place to another, working for anybody who is willing to pay their price. They’re both orphans, possibly brothers, and they’re asked to kill two people, a school teacher and an itinerant wise man, called ‘a new Jesus’, who tells the campesinos that the natural resources of the earth belong to the people (Jesus was often seen as a proto-Marxist in these days). Both commissions are carried out, but then they’re asked to do two more killings … 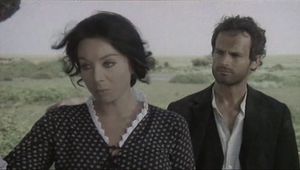 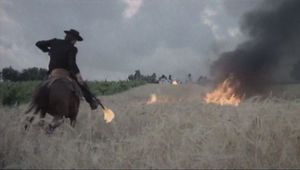 Since there are two experts, there are also two characters needed to procure the story with its crucial twist. The first is a beautiful woman, Soledad, who sympathizes with the campesinos, the second a landowner, Don Lucas, who has confessed, on a conference with his upper-class friends, that he wants to negotiate with the campesinos about their working conditions. While the older brother, Marcos (Marco), falls in love with Soledad and changes sides, The younger one, Giacobo, is hired by Don Antonio, the leader of the landowners, to kill Don Lucas. He carries out the order, but is killed himself afterwards by Don Antonio’s men, in an attempt to cover up the truth and to put the blame on the revolutionary movement. When he discovers the truth, Marcos sees red (2), and the landowners will now reap what they have sown, the rage of the wind, la cólera del viento.

There’s a lot of confusion about the title. The Italian language version opens with a Shakespeare quotation from The Tempest, but this is absent in other versions. Marco Giusti thinks the title is taken from a poem by Pablo Neruda, Poema a Rafael Alberti (3). Neruda had communist sympathies, but the poem seems to have very little in common with the things happening in the movie. Most probably the title is a reference to a line from the Hebrew Bible, that is also referred to by Don Lucas: “For they sow the wind, and they shall reap the whirlwind. The standing grain has no heads; it shall yield no flour; if it were to yield, strangers would devour it.” (Hosea 8:7). This is also more in line with the large number of Biblical names used: Marco(s), Giacobo, Antonio, Lucas, Rafael etc.

Apparently Camus had a more serious political drama in mind, and the western elements were imposed on him by that second Italian co-producer, Mario Cecchi Gori, who also insisted on casting Terence Hill. It’s hard to say if these alterations ruined a potentially better movie, or, quite on the contrary, made a slow-moving, all too pretentious movie watchable. The story about suppression of the working class, growing social awareness, and two brothers choosing a different path, isn’t bad, but as more often is the case in these would-be intellectual movies from the decade, the political message is rather simplistic; it’s more Bakunin and Proudhon than Marx, and the basic idea seems to be that property is theft (4). As a result, the idea is that we only have to dispossess the rich to create a fair and prosperous society.

As it is, the movie is not entirely devoid of interest, but in spite of the western action and romantic sub-plot, it’s rather slow-moving. Hill isn’t very convincing; he has the right face for comedy westerns and Barboni would soon use his blue eyes and disarming smile to maximum effect, but he isn’t a great dramatic actor and there’s no chemistry between him and Buccella. However, the supporting actors are great, notably Fernando Rey (as the evil Don Antonio) and William Layton (as the more compliant Don Lucas). I also liked the score by Augusto Martelli, but it often felt as if it was written for a completely different movie.