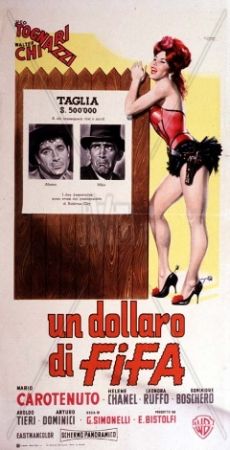 An Italian pre-Leone western, but not in the usual sense of the term. It was made in 1960, when no Sergio was thinking of making a western. With its dance-hall routines, including songs, sketches and juggling tricks, it still has one foot in the fifties, but with a story set in the West, it takes a bold step into the next decade. The title is a reference to Rio Bravo, called Un Dollaro d’Onore in Italian, but only one scene of the movie is parodied, the famous scene in which Dean Martin is told by blood dripping into his beer that the wounded man he’s looking for, is right above him (1). The rest of the movie bears no resemblance to Hawks’ movie but rather presents the premise of Nicolai Gogol's famous play Revizor (The Inspector General) in a western setting.

In Gogol’s play a civil servant with a wild imagination is taken for a government agent, and starts believing his own myth. On several occasions Hollywood freely used Gogol’s central idea to create comedies. Illustrious examples are The Inspector General, with Danny Kaye, and The Paleface, with Bob Hope. The latter seems to have influenced Un Dollaro di Fifa considerably. Like Bob Hope, Tognazzi and Chiari play strolling artists (today magicians, tomorrow singers or vendors) who swap their clothes for a cowboy outfit after they are hailed as heroes in a western town. Hope was a travelling dentist on the run from patients he had mistreated, Un Dollaro di Fifa starts with Tognazzi and Chiari running away from the spot after one of their conjuror’s tricks has gone wrong: An Indian woman they have juggled away won’t re-appear. Chiari repeatedly rolls cigarettes with one hand, a trick Hope tried to master in The Paleface. The film also adopts the idea of a female gunslinger coming to the aid of the impotent male: instead of Jane Russell as Calamity Jane, we get two famous sex pots from the period, Hélène Chanel and Leonora Ruffo as the determined and sharpshooting sisters Alice and Sara. 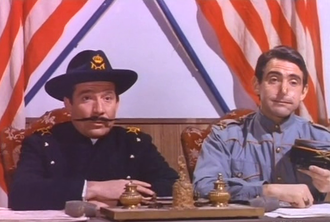 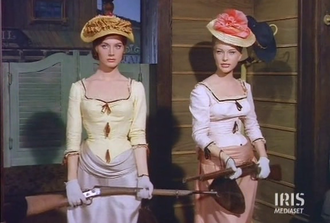 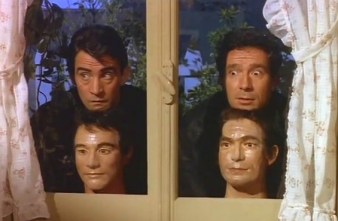 The story of Un Dollaro di Fifa is quite simple: with a lot of luck and some help of those guardian angels, the two clean up the town and become real heroes, but they’re (almost) hanged as imposters when they’re recognized by the sheriff, who had bought one of their miraculous potions in the past, and subsequently lost all his hair. The way they escape from the hanging, is quite bizarre, to say the least. Like most other adaptations, the movie disregards the social satire as well as the dreamlike, surrealist atmosphere of Gogol’s play, and turns it into a straightforward (musical) comedy. Gogol’s play is more about the townspeople and their servile and hypocritical behavior than about the civil servant who is taken for a governmental agent. It ends with the arrival of the real revizor, which is interpreted as the end of all false illusions. Un Dollari di Fifa ends with the two running off with their guardian angels.

Un Dollari di Fifa also shows some resemblance to the kind of dance hall westerns that were made in Germany, in the early sixties, with the likes of Peter Alexander (Graf Bobby, der Schrecken des wilden Westens) and Freddy Quinn (Freddy und das Lied der Prärie). These kind of movies apparently ‘were in the air’. Alexander and Quinn definitely were the better singers, but Tognazzi and Chiari had a lot of experience in both cinema and theatre, and were by far the better actors. As a comedy the movie has it’s ups and downs, when it’s funny it’s funny, when it’s not it’s atrocious. Some of the jokes require a certain level of acquaintance with the Italian language and culture. E’ pericoloso sporgersi, it is dangerous to hang out (of the window) is a phrase that used to be affixed under nearly every window in every Italian train. In the movie a cowboy who is dangerously hanging over a balcony, is shot while the line is spoken. Un Dollaro di Fifa is not an essential step towards the world of the spaghetti western. On the other hand it shows how global and flexible a typical American genre like the western had become in 1960.

Retrieved from "https://www.spaghetti-western.net/index.php?title=Un_Dollaro_di_Fifa_Review&oldid=131435"
Categories:
Cookies help us deliver our services. By using our services, you agree to our use of cookies.