A man working in the field, is approached by a gunman stealing up on him from behind. The gunman carefully draws his gun from the holster, fills the empty chambers with bullets, and warns the man in the field not to move. But instead of killing him, he saves the man's life, by shooting the venomous serpent at his feet. However, the biggest surprise of the entire scene is not the outcome, but the text engraved on the handgun: Made in Italy. The opening scene is set in a place surrounded by lush green hills, but when two men (of course old friends) ride off, they almost immediately arrive in the desert. Yes, we're in a spaghetti western, where the guns are made in Italy and the desert is made in Spain.

The plot of Wrath of God is standard spaghetti western fare as well: Brett Halsey is Mike Barnett, a gunslinger who goes after the seven men who have killed his wife and stolen his money, leaving him only the meager sum of seven dollars. Barnett tracks them down, one by one, marking every killing with one of the seven dollars. This idea of the seven dollars was already used by director Cardone in Seven Dollars on the Red, a similar revenge western about an man (in that case played by Anthony Steffen) travelling the West in search of the bandits who have killed his wife. But in that movie the quest took fifteen years and matters were complicated by the fact that the bandit leader had spared the life of Steffen's son - then a baby - and raised the boy as his own blood. In Wrath of God the quest only takes a couple of days and until the finale there seems to be no complication at all. 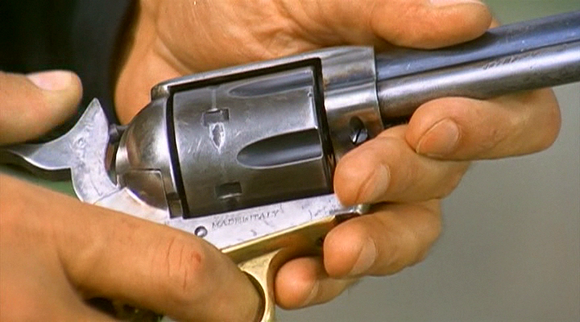 Wrath of God seems to divide genre fans. Some call it above average, others think it's a turkey. If you're one of those who think at least a minimum of consistency is required, you might be daunted by the gaping holes in the script. When Barnett tracks down the killers, none of them seems to recognize him, even though they've met him only days before. One of the villains comes back to life after Barnett has finished him off with a bullet in the forehead. It's, in Marco Giusti's words, totale delirio - I don't think a translation is needed here. Cardone tries to fill the gaps with scenes featuring funny old timers (modeled after the Prophet or Piripero from the Dollar movies) and a few protracted fistfights, with blows sounding as loud as a battering rams.

Being very episodic, the movie often feels like a series of set pieces, different in style and atmosphere. But some of these set pieces are imaginative, notably a fight in the desert, shot from a high position, and a protracted sequence set in jail, with Barnett setting an inventive trap for one of the murderers. There's also a bizarre scene in which luminous paint is used, an almost surreal moment, vaguely similar to those 'mirror scenes' in which a gunman can't locate his opponent and is finally shot by him when he's out of bullets. The finale may remind viewers of Henry King's The Bravados, but in this case the plot twist is rather predictable, and also lacks the resonance of the corresponding twist in King's movie (*1). 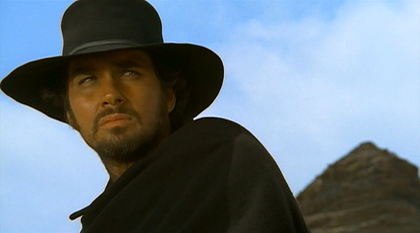 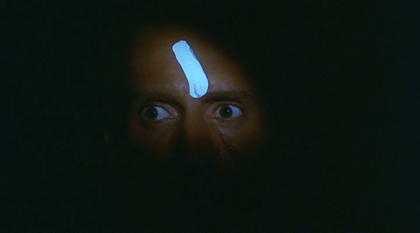 It cannot be denied that this movie has a fair amount of flaws, but the score by Michele Lacerenza, the trumpeter from A fistful of Dollars, is great (that plaintive trumpet will send shivers along your spine) and Brett Halsey is one of those actors who were born for the genre. Wearing the same outfit as in Today it's me, Tomorrow it's You! (which remains my favorite Halsey western) he represents one of the prototypical icons of the genre, the dark angel, the once peaceful man turned into a messenger of death. Halsey plays him in a laid-back style, hiding his inner rage behind a cold, determined smile, continuing his bloody trail, executing the beasts who have ruined his life in creative fashion. That's how we like our avengers.

A gunslinger wants to settle down, but his sweetheart is murdered and his fortune stolen. He tracks down the killers one by one, killing them in creative fashion. An episodic revenge western that seems to divide the fans of the genre, some like it, others hate it. Brett Halsey is great as the angel of death and the score by Lacerenza (the trumpeter from A Fistful of Dollars) is memorable.

Simon Gelten is a long time contributor to the SWDb. "I'm not as old as Tom B. but I'm working on it. I hope to catch up with him by the end of the next decade.", he says. Simon saw all Leones and several of the Corbuccis in cinema, most of the time in Eindhoven, the city where he was born. Currently Simon is living in Turnhout, Belgium. Simon's names in the database are scherpschutter and Tiratore Scelto.
Retrieved from "https://www.spaghetti-western.net/index.php?title=Wrath_of_God_Review_(Scherpschutter)&oldid=107073"
Categories:
Cookies help us deliver our services. By using our services, you agree to our use of cookies.