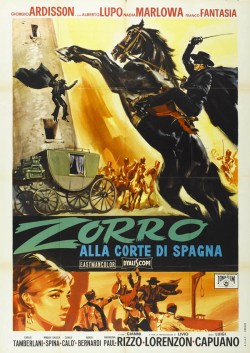 When the Duke of Lusitania dies, his brother Ramon seizes his lands, depriving the widowed Duchess and her daughter of their rightful inheritance. Ramon plans to kidnap his niece and force the Duchess into renouncing her rights but Zorro, a mysterious masked figure, appears on the scene to defend the women.