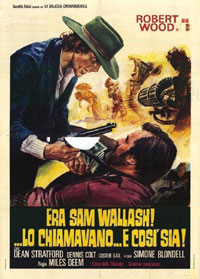 After watching this movie, it was perfectly clear to me why Demofilo Fidani - who is credited as Miles Deem in this case - is called the Ed Wood of the spaghetti western. All things considered, this is an amateurish, ultra-cheap production that lacks all possible coherence, visually as well as story-wise. But to me it's one of those films that are so bad, they're good. It made me laugh more often than most comedies. A protagonist who says 'Amen'(1) when he kills somebody and has a fobia for clapping doors, a ridiculous saloon brawl in slow motion, excessive violence, and a guy who says, halfway an elaborated shootout: "I think I hear shooting" - that's all brilliant. Acting performances range from very bad to even worse, and never flirt with acceptability. I couldn't make head or tail of the script, a product of Fidani's personal brain. For no discernable reason a witness of a massacre isn't eliminated. Subsequently this witness starts killing those responsible for the killings one by one, again for reasons that are all but clear. When he sees or hears a clapping door, this causes post-traumatic stress. This poor fellow is called Sam Wallash (2) and is played by Robert Woods, who rose considerably in my estimation because of it. It's impossible to make a spaghetti that is worse than The Belle Star Story, even for Fidani, but it's beyond doubt that this is pretty bad movie. But there are enough diverting moments to make it worthwhile ... at least in my opinion. Lorro Gori's atmospheric score is by the way tremendous.

Retrieved from "https://www.spaghetti-western.net/index.php?title=His_Name_was_Sam_Wallash_/_Savage_Guns_Review&oldid=43239"
Category:
Cookies help us deliver our services. By using our services, you agree to our use of cookies.