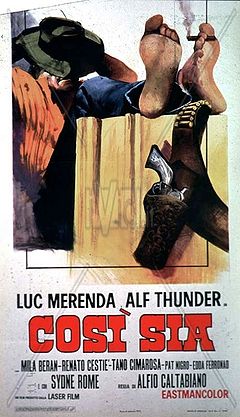 Note: Not to be confused with Guido Zurli´s A Man Called Amen from 1968 or Demofilo Fidani´s His Name Was Sam Walbash, But They Call Him Amen (1971)

In the opening scene we spot a man, riding a mule and wearing a sombrero, who’s pretending to be asleep. Meanwhile he is searching the surroundings through a large hole in his hat. The frontal shot of him doing so is very confusing for an unprepared viewer (as myself). Subsequently, the man engages a dialogue with an old man about water for his donkey and the poor animal is allowed to refresh itself – but instead of drinking like a decent donkey would do, the animal sucks up all the water in a moment. At this point I was sure about the direction the movie would take, and decided that the idea to make the guy with the hat look like a retarded asylum refugee was intentional. Cosi Sia belongs to the insane offspring of the Italian western comedy era. In it director Alfio Caltabiano spins his vision of entertainment at full speed. Caltabiano also directed a sequel named Mamma mia è arrivato così sia (1973).

The next scene, depicting an ambush of a stagecoach, offers a combination of homosexual jokes, routine gunplay (without killing), stupid lines in a attempt to be funny, and a chase, with the gay bandits hunting a poor fellow dressed in a corset. But to be fair, the jokes are not just homosexually oriented, since the donkey is also involved in the chase. Anyway, it’s far from clear at which type of audience this film was aimed – nobody is killed throughout the entire movie (so the feelings of small children’s won’t be hurt), but homosexual violation (albeit off-camera) is on the program.

Our hero with the sombrero, called Horatio/Amen (and played by Luc Merenda), has come to town to visit an old ‘friend’, Smith, played by director Caltabiano himself. Smith is the local priest and – the local blacksmith. He once stole some money from Horatio, who now wants it back, but unfortunately, Smith used the money to serve God. How? He promised a dying priest to take over his holy profession – unfortunately this priest had been living in a town without a church. So, Smith spent all Horatio´s money to build one! As well as being a servant of God, reverend Smith is also known as a man able to open any bank safe. Actually, Alfio Caltabiano (credited as Alf Thunder) has a good screen presence as the tall, muscular priest and his way to open a safe with huge hammers is one of the very few moments that are truly entertaining and don´t make you crawl under the nearest boulder to avoid more comedy embarrassment. But about that later. On the other hand, Luc Merenda would probably be better off in a movie about fashion models than in a western – but since this is not A Fistful Of Dollars, or some hidden gem, I´m not complaining. Actually, I think he could do a great elf performance in a Tolkien movie.

To make a long story short, Horatio, after being a witness of the reverend´s not so celestial abilities, proposes him to join forces for the robbery of a strongbox with half a million dollars inside. Their heist party is soon accompanied by a senile old man, a bartender and, yes, a ‘cute’ blonde kid. What? No love interest for the hero? Yes, there’s a girl and her name is Sydne Rome. She´s young and beautiful and at the beginning of her career, which has not yet come to an end (her last appearance was in Terence Hill´s Don Matteo). But don´t expect too much of her in this movie, although there’s some half-nudity on the program (note for her fans – her short bath scene is quite revealing). Every member of a gang has its specific role, but it’s probably the most boring heist you’ll ever see in a spaghetti western. After some double-crossing, it all leads to one big brawl madness, in which Caltabiano makes his way through a saloon full of customers, who suddenly have become his whipping boys. The Reverend is after Horatio as a result of a couple of disagreements, and before they settle their score, the viewer must endure all kinds of slapstick silliness, including classic punches, metal traps, plastic cactuses, Luc Merenda performing some karate/kung-fu tricks (and shrieks) and Caltabiano using an opponent as a basket ball. When I saw how he was dribbling with a guy and subsequently threw him in the air, I didn’t expect the guy to end up in a basket, but he did. I guess, baskets on the walls had to be a common part of a saloon inventory in Caltabiano´s Wild West. The gay bandits also participate in the brawl and again they chase this well-dressed fellow to satisfy their urges – probably violent situations somehow invoke their repressed homosexuality and they just can´t resist them in a whirlpool of outburst passion.

It´s appropriate to mention who´s behind the writing – besides Caltabiano, also Dario Argento is credited (but only on IMDB), who needs no introduction, and Adriano Bolzoni, who worked on a scripts for various directors – Corbucci, Siciliano, Fulci, Lizzani, Vari, Lucidi...- he just worked on a plenty of famous, or infamously famous westerns. Although it mainly focuses on a dumb fun, it has some inspired moments of comedy madness and the screenplay delivers some good twists and turns. Speaking of the script, I think movie could have worked better as a lighthearted buddy western without an overdose of silliness, but then again I admit that few ideas are quite entertaining and will certainly provide fun for those of you looking for slapstick. It’s a sin not to talk about the music of a spaghetti – Daniele Patucchi composed a theme which starts in a serious manner, but quickly turns into a merry tune with men singing „Così sia” – be prepared the tune will stay with you for a while after the session. Except for the main music theme there is not much to speak of.

Is this movie a recommendable one? The answer may be surprising, but I think it is. However, a few preparations before the watch could be useful, for instance a couple of beers, the company of like-minded colleagues, and the ability to enter the right humor mode – some of the scenes were so dumb that I felt a little embarrassed about watching them, and I was laughing more about my own discomfort than about the jokes itself, which really originate from the bottom of the comedy barrel. After watching these mindless morons, some sort of cultural ritual could be helpful to return to a normal mindset – I usually watch a couple of new episodes of Big Bang Theory to banish inferior forces back to their realm – but the choice is yours.

Retrieved from "https://www.spaghetti-western.net/index.php?title=Man_called_Amen_(Così_sia)_Review&oldid=101814"
Category:
Cookies help us deliver our services. By using our services, you agree to our use of cookies.