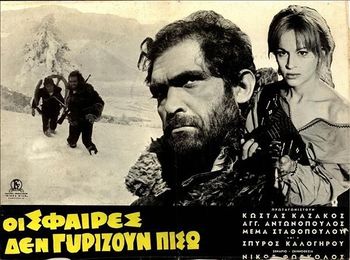 From a tragic misunderstanding, the farmer Stathis Karatasos (Angelos Antonopoulos) is accused as the leader of a notorious gang. He manages to escape just before getting executed and the law enforcement starts chasing him. Even the bandits are looking to find him, believing that he has the loot of the robbery in his possession. In addition, another prisoner called Tsakos (Kostas Kazakos) tryies to locate him and bring him back dead or alive, in order to ensure the freedom promised to him by the police. But, when he meets the family of Stathis, he will change his mind and protect them from the bandits.

Retrieved from "https://www.spaghetti-western.net/index.php?title=Sfaires_den_gyrizoun_piso,_Oi&oldid=103722"
Categories:
Cookies help us deliver our services. By using our services, you agree to our use of cookies.