Gunman of One Hundred Crosses Review 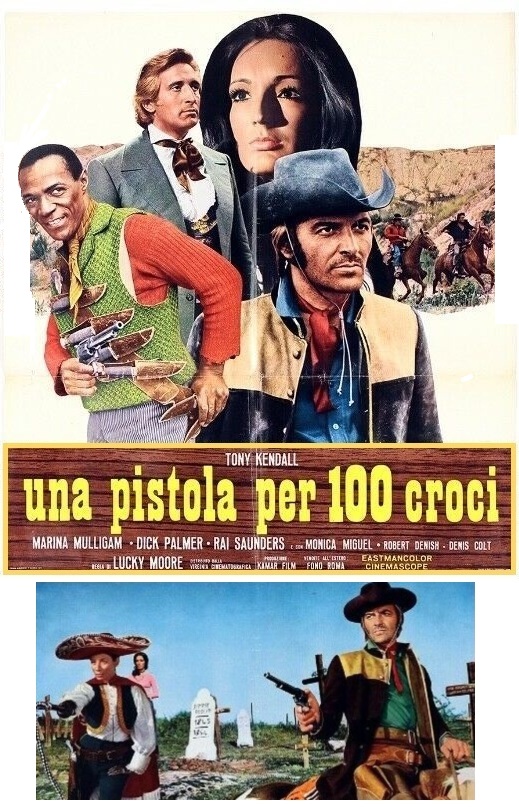 A low-budget (or even no-budget) genre entry that nevertheless manages to entertain, thanks to a couple of decent performances, a few unexpected twists and a whip-wielding villainess
________

The first of two spaghetti westerns (the other one being Black Killer) written and directed by Carlo Croccolo, a comedian who had become a household name in Italy thanks to his work for TV and appearances next to legendary comedians like Totò and Peppino De Filippo. He had 'discovered' the western genre when playing a minor part in Freddy und das Lied der Prärie, a star vehicle for German/Austrian Schlagersänger Freddy Quinn. He liked westerns and his dream was to direct one himself, but no one seemed willing to finance his plans. He then asked Tony Kendall to appear in his movie in exchange for a few paintings and Tony couldn't say no to a good friend ... (*1)

Tony Kendall is a ex-Confederate officer, known by the name of Santana (*2), who is looking for the traitor who was responsible for the death of many Confederate soldiers. Santana accidently witnesses how a young man is ambushed and murdered by two crooks and later discovers that the boy's sister, the red-headed Jessica, is to be married to the man who had ordered the killing. And of course this man is the traitor he was looking for ...

The film was shot within a couple of weeks on no more than a handful of locations, but cinematographer Franco Villa made the very best of them. The title is nonsense: Croccolo didn't even have one hundred extras, let alone one hundred crosses to mark their graves. In other words: it's a no-budget rather than a low-budget movie, but - second surprise - it's not that bad. Tony Kendall was more at ease in the tongue-in-cheek Kommissar X movies, but he's an affable spaghetti western hero and Mimmo Palmara is quite good as the slimy traitor who is eventually betrayed by his own partner in crime, the whip-wielding Monica Miguel. There are nice cameos by Ray Saunders as a knife-throwing former slave and Marina Rabissi (Mrs. Croccolo at the time) as the red-headed damsel in distress. Croccolo himself plays a stammering and clumsy sheriff; his character seems completely out of place but his final scene ("Santana is coming! Santana is coming!") is quite funny. For most part the story-telling is a bit haphazard, with a few card games and the inevitable saloon brawl thrown in, but things pick up in the final third, with a few unexpected twists, a protracted shoot out at the villains' lair, a cat fight and a remarkably sexy (and for the genre rather daring) scene in which the black clad villainess undresses the heroine using her whip. 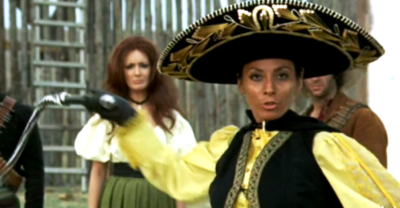 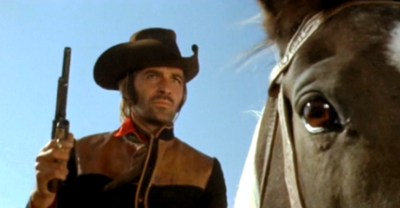 Simon Gelten is a long time contributor to the SWDb. "I'm not as old as Tom B. but I'm working on it. I hope to catch up with him by the end of the next decade.", he says. Simon saw all movies by Sergio Leone and several by Sergio Corbucci in cinema, most of the time in Eindhoven, the city where he was born. Currently, Simon is living in Turnhout, Belgium. Simon is active within the database as both Scherpschutter and his alter ego Tiratore Scelto.
Retrieved from "https://www.spaghetti-western.net/index.php?title=Gunman_of_One_Hundred_Crosses_Review&oldid=115296"
Category:
Cookies help us deliver our services. By using our services, you agree to our use of cookies.