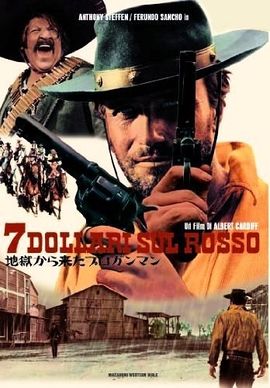 A farmer becomes an avenger after his Indian wife is killed and his son is kidnapped. His quest will take fifteen years and when he finally finds the man who has ruined his live, he also discovers that his own son has become a merciless killer. An essential movie from the early days of the genre. For most part it’s standard fare, but the movie scores with a great, melodramatic finale set during a heavy thunderstorm

SEVEN DOLLARS ON THE RED

Seven Dollars on the Red (7 dollari sul rosso, view Database Page is often called an essential film of the early days of the genre. 'Essential' doesn't mean that it's great. It's an interesting early genre outing, still tributary to a more classical style of film making, but few things set it apart among the stream of spaghetti westerns that deluged the market in the mid-sixties, until the last twenty minutes, which are truly memorable. 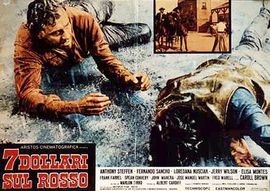 When Johnny Ashley (Anthony Steffen) is away from home his ranch is attacked by the gang of the notorious bandit El Chacal (Fernando Sancho). His Indian wife is killed and his son Jerry is kidnapped by the bandit, who raises the boy as his own blood. Steffen spends all his energy traversing the West, in a fifteen years quest for his son and the man who ruined his life. What he doesn't know is that his son, now called Bill (Roberto Miali), has become a ruthless bandit in imitation of his foster father. Inevitably the final confrontation, between a father and his long lost son, will be a very dramatic one...

Alberto Cardone is credited as director but he was supervised by Mario Siciliano, who also produced. The bulk of the movie was shot in 1965, when the production of spaghetti westerns was not yet at its zenith, and it was supposed to be the first production to use the new western town of the Elios film studios in Rome. But for obscure reasons the production was suspended, and when the works were resumed, director Cardone and Siciliano had to wait for their turn: meanwhile no less than fifteen western were in production (1). The town looks brand new in the movie, freshly painted, inviting. Django, released later the same year, would turn the Italian western town into a muddy, dirty hell-hole.

Ashley is an obsessed man, a captain Ahab desperately looking for his Moby Dick. He swears to search the entire area, step by step, and even promises to pursue everyone with a bounty on his head. A friendly sheriff warns him that he may end up on the wrong side of the law, but Ashley cannot be stopped. The blood calls for blood philosophy (you spilled my blood so I’ll spill yours), essential to most spaghetti westerns of the golden age, is ‘doubled’ during the film’s finale: Steffen has been looking for the murderers of his wife, but now he must face his own son, who thinks Steffen has killed his father ...

The least you can say is that this is an uneven film: the storytelling lacks rhythm and while Steffen's quest is supposed to last some fifteen years, a few grey hairs at the temple are the only sign of the passing of the time. All of a sudden Steffen’s son has become a grown-up man while Steffen himself hasn’t changed (not even his clothes!). Most action scenes are standard fare, but some of them look more inspired. Best of all is a scene with Steffen (or more likely his stunt double) jumping through a closed window to shoot the villains inside by surprise. Sancho does his usual impersonation of a Mexican bandit and both Loredana Nusciak and Elisa Montes lighten up things with their presence, even though for once sweet Loredana is not whipped (which might be a let-down to some of her admirers!) and lovely Elisa has quite a hard time as Miali's love interest. De Masi's score (featuring a typically plaintive trumpet by Michele Laceranza) isn’t bad, but seems to suggest more emotion that we experience on-screen.

But the film redeems itself in the last twenty minutes, when Steffen accepts a job as deputy in a town that is expecting Sancho to rob the local bank. The gang is ambushed in Wild Bunch style and subsequently Steffen faces Sancho for a fight in which both play Dr. Hook (but without the Medicine Show). With Sancho ending up dead in a water tank, his adopted son, still thinking Sancho is his natural father, announces his arrival in town for the next morning to take revenge on Steffen. Set during a heavy thunderstorm, the dramatic confrontation between father and son almost reaches gothic dimensions, the lashing rain flogging the two men, as if to galvanize their agitation (2).

Retrieved from "https://www.spaghetti-western.net/index.php?title=Seven_Dollars_on_the_Red_Film_Review&oldid=105894"
Categories:
Cookies help us deliver our services. By using our services, you agree to our use of cookies.