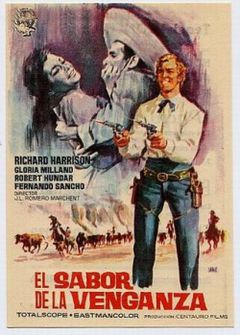 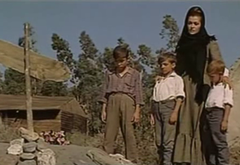 Released in 1963, this is one of those predominantly Spanish pre-Leone westerns. It was co-produced by Alberto Grimaldi, and although some Italian elements start shining through, we’re still far removed from the ‘dirtier’ approach that would dominate the European western in the years to come. Most people will want to watch it for historic reasons, but it’s actually quite good. It’s no doubt one of the better pre-Leone westerns and way better than the immensely successful 100.000 Dollari per Ringo, also starring Richard Harrison. The Spanish title is El Sabor de la Venganza (The Taste of Vengeance), but it’s better known under its Italian title, I Tre Spietati. In the English speaking world this became The Pitiless three, The Three Ruthless Ones or (quite imaginative) Sons of Vengeance. It is not to be confused with Marchent’s own The Implacable Three, released earlier the same year.

Like French author Jean-François Giré has observed, those early Spanish movies have a cleaner look than their Italian, post-Leone counterparts. The differences are noticeable in both set and costume design (just look at the second screenshot), and also in the approach of the revenge theme (1). In the opening scene we witness how a ranch is raided by a group of bandits on the run. Three young children, all of them boys, witness how their father is murdered and their mother nearly raped (a rape attempt apparently was as far as film makers were allowed to go in these days). After the events, the woman asks her three sons to swear on their father’s grave that they will revenge her once they have reached adult age. It’s a strong image: the mother, the three sons, the cross and the vow. But it was also a contested image: Spanish contemporary critics opposed to the idea of a mother putting her sons on the revenge trail (2).

After the opening scene the film jumps forward in time. The three boys have become grown up men: Jeff (Harrison) has become a bookworm, who wants to work within the law and bring the murderers of his father to justice, Chis (Undari) is obsessed by the thought of revenge and soon goes astray, Brad (Palenzuela), the oldest one, inherits the ranch, and gradually learns to live with his bitterness. At this stage, the blood calls for blood ethics of the spaghetti western were still way ahead and people were supposed to act in a more chivalrous way, more in accordance with Spanish Golden age dramas. The true hero, is therefore Jeff, the law-abiding citizen, not Chris, the trigger-happy brother. Furthermore the obsessive ideas of the mother, about hate and vengeance, eventually lead to her downfall. The son who fulfills her thirst for revenge, dies in her arms, in the film’s melodramatic, but effective finale.

To a certain extent, this movie still tries to emulate the American western. The score, by Riz Ortolani, is based on American western scores (the main theme reminded me of Elmer Bernstein’s score for The Magnificent Seven) and Fernando Sancho is not yet asked to portray the exuberant Mexican bandit he would soon be identified with (as an actor that is). Instead he’s a more Hawksian comical side-kick, kind-hearted and ebullient, but loyal and reliable under pressure. Overall the Mexicans get a much better treatment here than in most spaghetti westerns. A protracted rodeo scene halfway the movie, shows them as happy people, full of life. Along with Undari, who always seems to be in those early westerns, Harrison and Sancho are the most familiar faces in the cast. There are nice cameos for actors who would soon become spaghetti western regulars such as José Manuel Martin and Aldo Sambrell. And then there's this bizarre casting of Gloria Milland as a mother who is five years younger than two of her sons (!).

This is a good pre-Leone western. It’s often ranked among the best Spanish westerns in history, but most people think Marchent’s next western Seven Guns from Texas/Antes llega la Muerte, was even better. It’s a bit rambling and this rodeo scene feels totally out of place, but the story is eventful and moving. And it’s good to see a whitewashed Andalusian village in a western made one year before Eastwood rode into San Miguel on a mule. Although it was a predominantly Spanish production, it did remarkably well in Italy. Co-producer Alberto Grimaldi used the money he earned with the movie to contract Leone for his second western after he had clashed with Papi & Colombo of Jolly Films.

Retrieved from "https://www.spaghetti-western.net/index.php?title=The_Pitiless_Three_Review&oldid=99094"
Categories:
Cookies help us deliver our services. By using our services, you agree to our use of cookies.