A fair sequel to A Stranger in Town, with Tony Anthony again as the down-and-out loner who cleans up a border town, this time using a four-barreled shotgun he received from the only sensible guy in town, a religious lunatic
____________

Tony Anthony returns as the stranger, the poor man's No Name, who wears a blanket because he cannot afford a poncho. The now classic opening scene has him riding through a desert landscape, protecting himself from the sun with a pink parasol and having conversations with his black horse, called Pussy. The scene is closer to the surreal world of Jodorowski's El Topo than to the first stranger movie, but things soon turn back to normal when the stranger finds a murdered postal inspector. He steals the man's identification papers (you never know) and rides into town, where a stagecoach is robbed (and all the passenger massacred) by a gang of eternally laughing crooks. The bandits were not after a strongbox, but after the stagecoach itself, that is entirely made of gold ...

Thanks to a surreal opening scene, a more elaborate script and some examples of ultra-weird humor, many think this is a better movie than the first one. The stranger is again beaten up severely before the script allows him to make clean slate: he's kicked in the face, even dragged behind the coach, but finally cleans up the town by shooting every villain in sight, this time with a four-barreled shotgun he got from the only sensible (huh?) guy in town, a religious lunatic, who also has some firework to spare. Tony has a few more lines of dialogue and some are quite funny (when the lunatic tells him to buy himself a ticket to heaven, his laconic answer is: "What does it cost?"). And there's also a hilarious scene involving Raf Baldassare, a chicken and that four-barreled shotgun. It's pretty tasteless but absolutely brilliant, and I won't spoil it by saying more about it.

The outlandish atmosphere and absurdist humor are preludes of what was to come in the two remaining Stranger movies, but compared to the first movie, this sequel is the more traditional and less original of the two (in spite of the parasol, the horse and the rolled cigarettes Tony never finishes). With only a handful of sets used and a few lines spoken, A Stranger in Town was as close to a minimalistic movie experience as the spaghetti western would ever get, and that's exactly what made it unique and fascinating. I called it a nightmarish vision of hell on earth. The sequel is longer on plot, but shorter on atmosphere. This doesn't mean it's a bad spaghetti western, it's a good one, with lots of action, a good villain and Tony growing nicely into the role of this enigmatic (and fascinating) stranger, a down-an-out loner who acts on impulse rather than thinking his actions through and therefore runs into danger with every step he takes.

The villain is played Dan Vadis, a former member of the Mae West Muscle Man Revue, and also features the ravishing Jill Banner, then a notorious sex kitten, who had been Clint Eastwood's extramarital lover for a while and now was (or would soon become) Marlon Brando's girlfriend. Some think Brando had asked executive producer Allen Klein to give her a role, but some people involved in the movie think she was Dan Vadis' girlfriend at the time and had not yet met Brando. It's also possible that Clint had opened a few doors for her in Italy. Allegedly she was courted by nearly everybody on the set, and even instructed her bodyguards to keep actor Mario Novelli (the one who tries to rape her in the movie) away from her (*1). 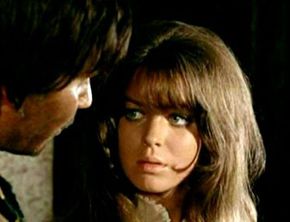 Simon Gelten is a long time contributor to the SWDb. "I'm not as old as Tom B. but I'm working on it. I hope to catch up with him by the end of the next decade.", he says. Simon saw all movies by Sergio Leone and several by Sergio Corbucci in cinema, most of the time in Eindhoven, the city where he was born. Currently, Simon is living in Turnhout, Belgium. Simon is active within the database as both Scherpschutter and his alter ego Tiratore Scelto.
Retrieved from "https://www.spaghetti-western.net/index.php?title=The_Stranger_Returns_Review&oldid=111607"